Last week for Show & Tell I bragged on my Dad being recognized for grassroots activism, and you indulged me like good friends and classmates do. Dad (Oopiderf) savored each of your comments, as did I. (*Bows head in appreciation .*)

Some of you inquired about his speech, and he was only too happy to comply. It’s short — about 4 minutes in delivery, and shorter to read. Please enjoy.

“Will all the morons in the room please stand up?” said the professor to his new class. After a seemingly long, uncomfortable silence a young man stood up. “Sir,” quizzed the professor, “do you consider yourself to be a moron?” Haltingly the student answered, “Not really—I just hated to see you standing there all by yourself.”

When you’re a grassroots activist do you, like me, sometimes feel like you’re “standing there all by yourself”?

I’m honored to and grateful to the Independence Institute for this award. I publicly express the great gratitude I have for my wife Dottie, for her understanding and support, and for that of my three daughters and their families.

How about the “dumbing down” of modern education? Bill Coors called it “contrived ignorance.” What the people don’t know makes them vulnerable and easily fooled. This brings forth two questions: 1) Who contrived it? And 2) How did they do it? That brings forth a third question: 3) What can we do about it?

Thomas Jefferson said, ‘If the people don’t have enough information to wield power correctly, don’t take the power from them. Give them the information.” That’s the answer I’ve worked for 20 years on two projects to accomplish just that.

Both projects go under the radar of modern education, from the people to the people, via email and the Internet. One is Project America, to teach quickly and effectively the power and majesty of America’s Freedom Documents—Declaration of Independence, United States Constitution and its incredibly important Bill of Rights, to get it into every head, heart and hand in the land.

The other is for the people to get Congressional spending under control with the One Percent Solution in the National Declaration of Fiscal Integrity. Implenting the projects will take citizens about 20 minutes a month.

Concluding, I tell you about my neighbor directly across the street. Their son was killed a month ago in Iraq. We went to their Fort Logan honorable last rites. On their car is a bumper sticker that says, “All gave some. My son gave all,” Staff Sergeant Kennith Mayne, and at the bottom, DOB, date of birth, and KIA, Killed in Action. If they can do what they do “over there” what can we be doing “over here”?

When I review who we are, where we came from and where we want to go, I consider each and every person a grassroots activist for personal freedom and political liberty, for limited government and self-governing people. Thanks for so generously supporting the Independence Institute and for all the good work you do. And thanks for the honor of this evening.

Thanks, Dad, for basically guest posting for me today. It goes a long way toward forgiving you for the whole You-MUST-watch-Free-to-Choose tug of war back when I was a teenager.

Ms Melissa, who is now preselling her book, will call on the next person for Show & Tell. So get back in your chair!
.

Is this Show & Tell Day or Career Day? No matter.

Fellow classmates, I bring to you My Dad, the Superhero. No, he’s not a fireman, an astronaut, or a rodeo clown.

Earlier this month, my dad was honored by a Colorado-based think tank for his legacy of community activism and political mentorship.

The Independence Institute awarded the Vern Bickel Award for Grassroots Leadership to Dad during their annual Founders Night.

Because of his VIP status, my mom, my sister, and our husbands were able to crash drink at this hoity-toity party and even dine at Table #1 with President Jon Caldara (even if you disagree with him, you’re sure to find him entertaining) and keynote speaker Michelle Malkin.

(Gino, Tami, Dad, Mom, me, Roger)
After Dad received his award, he gave an incredible speech about responsibility and sacrifice, freedom and liberty, the lengths people will go to gain it, and how easily it can be lost. 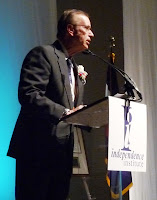 I was moved nearly to tears by pride for my upstanding and eloquent Dad. I think showing off a bit about him is appropriate for Show & Tell, don’t you?

Ready for recess? First check out the other Showers & Tellers in Ms Melissa’s room.

Regarding the Federal Reserve, which is not “federal” (it’s NOT a government agency — it’s a privately held corporation and its ownership is a well-guarded secret):

“People talk about the issue of Republican vs Democrat… It’s organized crime. You call the Republicans ‘Genoveses’ and the Democrats ‘the Gambinos.’

The people at the top treat it like it’s their crap game. They’re making a lot of money. Occasionally somebody at the table shoots each other but the moment anything threatens their crap game, they all unite to protect it.

They’re both controlled by the same financial, economic and corporate interests.”

— Michael Ruppert, FromtheWilderness.com in this film (at 59:32).

All this campaign ugliness has been a red herring, a non-choice masquerading as choice, some expert sleight-of-hand to get citizens to hand over more and more of our personal and economic freedoms.

No matter how you voted, I encourage you to keep an eye on your liberties in the coming years.