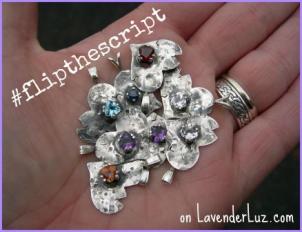 As we close out November — National Adoption Awareness Month — I’ve turned this space over to adoptees, sharing a small portion of the highly successful #flipthescript movement. I  can see that many, MANY of you are reading. But few of you are commenting, so I can’t quite tell how these posts are being received. I hope it’s with the spirit intended — to be helpful to all involved in adoption by adding in the less-often heard voice of the adopted person.

Some believe information is power and some believe ignorance is bliss. I suppose if you fall in the camp of the former, you’ve taken these last few #flipthescript posts  for what they are — cautionary tales of how adoptions can feel to the adopted person (the guest posters have not generalized their experiences to all adopted people). And if you fall into the camp of the latter, you may feel provoked by these posts, worried that you’re participating in a social institution that’s not as glowy as you’d previously thought.

I think  it’s healthy  to periodically examine what we “know” to be true. To paraphrase Maya Angelou, when we know better we do better. A good reason to be open to alternative or uncomfortable points of view.

As you’ll see from today’s guest poster, it’s important for adoptees who have felt silenced for decades to raise their voices and be heard, if only to take back their one story.

Today’s #flipthescripter is JoAnne Bennett. JoAnne has spent the last 21 years trying to piece together an adoption journey that has too many twists and turns to count. Her blessings, on the other hand, include having raised three wonderful now-adult daughters alongside her supportive husband of almost 40 years. You can find her at her blog, Stories By JoAnne Bennett.

I struggle to give myself permission to say out loud that I am angry. It’s not because I am supposed to be nice, or that I always try to find the good in everything. The truth is that this painful story is about my beginnings, and it’s messed up and wrong. Until now, all that once-little-girl in me could do was cry. Over the years, though, mad has replaced sad, and I no longer want to feel invisible and insignificant as an adoptee. I’m flipping the script.

Now that all the players in my under-the-table adoption placement are dead, I feel safe to say without fear of some kind of backlash, I’ve had to pay dearly for the losses; the roles each of you played underhandedly in my bogus adoption for whatever inexplicable reason that is still murky but was obviously criminal.

Whenever I share with others my disturbing story about my not-so-above-board adoption involving a dishonest judge and a conniving delivery doctor (and most likely other players as well) often I hear the words, “Someone profited from your adoption.”

Defensively, I say, “Well, it certainly was not me!” My adopting parents were in the process of adopting another newborn only two months older than me. His adoption appears not quite as sketchy as mine, but both of us had waivers typed slightly different and signed by the judge after-the-fact (fishy), curiously stating that it was not necessary to check the adoptive home we were being placed in.

The reason given for this legal short cut? Both my non-biological brother and I were supposed to be separately related by blood to someone in our adoptive family.

That is far from the truth.

People I’ve spoken with in the courts of this jurisdiction later said they have never seen anything like these two waivers, filed in the 1950s. My file is empty except for this mysterious waiver, according to the State of Nevada.

Many who hear my story think, Oh, my, this must have been a desperate young couple, not able to conceive a baby, for professionals to put their careers on the line to get them a baby at any cost.

Again, that was far from the truth. My adoptive parents already had a biological son and, in fact, were not emotionally fit to raise any children. I’ve always wondered, Did the judge and delivery doctor know what was the deep dark secret that would have prevented these adopters from parenting me had they obeyed the law?

Disappointingly, another professional did know that secret.

Years ago, I spoke with my childhood pediatrician and he said, almost proudly “I knew your adoptive father was an alcoholic. I had absolutely nothing to do with your adoption!”

But he didn’t stop it, even knowing the truth, that my adoptive father had a serious drinking problem and rage issues. The last time I saw my adoptive father was when I was 6. The police were taking him away on one dark, scary night for domestic violence fueled by his alcoholism. It was a terrifying night for a little girl who already felt sad and confused by the constant turmoil in our family. My verbally and emotionally abusive adoptive mother suffered from serious mental health issues, too.

In recent years, when I was searching for my birth father, I sent letters to many of the old-timers who still lived in the small mining town where I was conceived. I enclosed my phone number saying it was okay to call collect if they might have some information about his identity. I heard back from some of the kindest individuals; only one bitter woman called me collect.

She started our phone conversation by saying, “Now I know what that money your mother borrowed was for and she never repaid me!” Her insinuation was that she’d been the one who paid the hospital bills from my birth, which was downright insulting but probably not far from the truth. My birth mother was married to a man other than my birth father and already had three older children. She was in a bind in more ways than one.

When I hear sirens even today, sometimes for a quick second it triggers that dark, scary night when I was 6 and my abusive alcoholic adoptive father was taken away forever.

I am not about a pity-party for myself, but rather I want to be a voice for changing mind-sets. I believe there are many people still wearing blinders, much like my childhood pediatrician. As a society, who are we trying to fool, and why won’t we look behind the veils of secrecy? With adoption being a lucrative multi-billion dollar business, I am sure it wouldn’t be far from the truth to suggest there are many individuals and agencies still profiting off adoption.

The doctor who delivered me decided after he retired he would talk with me on the phone. Of course, he was evasive in answering any of my questions, no matter how non-threateningly I tried to present them. It’s what he said at the end of our brief conversation that left me speechless with anger. This man, who had played a major role in putting me in harm’s way as a newborn for his own personal gain, had the gall to ask me, “Have you had a good life?”

I can’t tell you how many times we adoptees have heard that being adopted is supposed to be a magic cure for being conceived in less-than-perfect circumstances. My hope is that even those who have no connection to adoption will start thinking about the consequences of people in power making decisions for the defenseless. Please understand that what happened to me still can and does happen now.

Flip the script and listen to us adoptees – the ones whose voices have been silenced by the powerful for decades. It’s time we are heard.

JoAnne’s passions are writing and making a difference in young people’s lives.  She contributed a chapter to the new book Dear Wonderful You, written by adult adoptees for adopted and fostered youth,  and she’s proud  to have an essay in an upcoming anthology, The Adoptee Survival Guide.  Painfully transparent through her words, as an author her heartfelt desire is to reach others whose voices have been silenced by abuse and adoption issues.

Thank you, dear readers, for opening yourself to these stories, for completing the #flipthescript circuit simply by listening.

21 thoughts on “#flipthescript 4: Someone Profited From My Adoption But It Wasn’t Me”