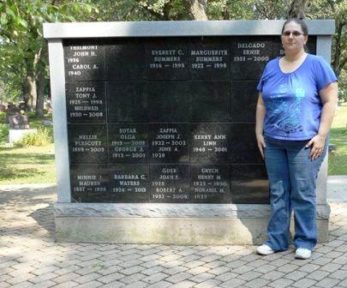 Have you seen the #flipthescript movement taking place during National Adoption Awareness Month? Conversations in Adoption World have historically been dominated by adoption professionals and adoptive parents. But increasingly since the 1970s, the voices of birth parents and of adult adoptees are being heard. Amanda H.L. Transue-Woolston of The Declassified Adoptee explains further via video clip in the announcement for the new book for adopted and fostered youth, Dear Wonderful You.

For several days as we close out November,  I’m turning this space over to adoptees. You may not agree with everything that is said in these #flipthescript posts. You may even find parts of these posts hard to read. But I believe there is value in listening, in being willing to see a viewpoint different from your own.

Today’s #flipthescripter is Tracy Hammond, an adoptee rights activist and a “baby scoop” era adoptee. She is a part-time metal-smith and jewelry artist. She is widely known for the broken heart adoption pendant she created and sells on Etsy (the Kay Jeweler debacle originally joined us) — that’s her work in the image above for this series.  Tracy writes about her experience being an adoptee on her blog at Adoptee Path.

When I think back on my childhood I can never remember once being asked how I felt about adoption, or being an adoptee. My adoptive parents never discussed my first family when I was growing up. They were the pink elephant in my adoptive parent’s home.  Only once when I was an adult did my adoptive mother ever mention my birth parents — and that was to tell me their ages. She claimed that was all she knew and the subject was never brought up again.

The only comments I got were people asking if I would someday look for my biological relatives, and telling me how lucky I was to be adopted because I could have ended up in an orphanage. 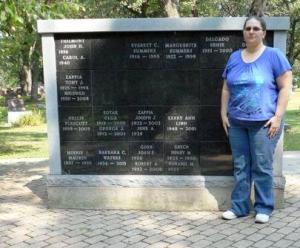 Tracy with her birth parents at their first meeting.

As an adult, when I speak out about my own opinions and experiences on adoption, I find people are not listening to me. This is why #FlipTheScript is so important to National Adoption Awareness Month (NAAM). You rarely hear from people who have lived the adoption experience.  By its very nature, adoption should be centered on “the best interest of the child.”

Yet others speak for us. This carries on even after we grow into adults. When the narrative of adoption excludes the chief stakeholder — the adoptee — the system is broken.  If adoption is about finding homes for children who need them, shouldn’t we then consider that adoptees need to be the strongest voice in the narrative of NAAM?  These are our very lives and well-being that NAAM is supposed to be about. But more often than not, it’s the adoptive parents’ voices, or adoption professionals being heard.

The exclusion of the adoptee voice is nothing new. But adoptees stepping forward and saying we need to #FlipTheScript is new. Why do our voices need to heard? Because only someone who has lived as an adoptee can understand adoption’s effects on forming who we are. When we are ignored, the lessons we have learned the hard way are not heard. When our voices are marginalized, we aren’t able to effect positive change.

Our society has a completely outdated viewpoint of adoption. Old narratives and misconceptions are still being rehashed during NAAM when we should instead be moving forward. Here are a few to start with.

Gratitude: It saddens me that adopted children are still being told “how lucky they are” because it implies they need to be grateful to be adopted. It’s something done to them that they have no control over. I can recall my Grandmother and Great Aunt telling me I needed to behave better than my non-adopted cousins because I needed to show my gratitude for even being in their home since I wasn’t a “blood relative.”

I know this archaic mentality still exists because we see a variation of the narrative each NAAM.  The complexity of losing your first family and being told you need to show gratitude to your adopters all at the same time is incredibly difficult and wrong for anyone to hear, let alone a child. The harmful psychological effect this has on children cannot be overstated.

Gotcha Day: Mine was called “My Special Day” and all it did was point out the months that separated my birthday and the day my adoptive parents brought me home. That “celebration” ripped open my wounds yearly. I spent decades wondering where I was and what was happening to me during the in-between time.

For many adoptees, birthdays are not happy or joyful, because our births were not a joyful time. For many of us it marks the first, last, and only time we saw our mothers. Losing your first family is not something that should be celebrated. For each family formed through adoption, another one is ripped apart. For me this is real, tangible pain that never goes away.

Adoptive parents who want to have a celebration can celebrate being a family on some day unrelated to a birthday, homecoming, or adoption finalization.  That is the humane and considerate thing to do. Burdening a child with the complex emotions that result from celebrating their losing their first family is a practice that should be abolished.

Many adoptive parents might cite that their child seems to have no ill effects from the celebration, but having lived it I can tell you that I wasn’t able to accurately verbalize my emotions on being adopted. I felt as though I needed to walk on egg shells and appear as if none of this bothered me, or that I never thought about my first family, my loss, and my pain. My adoptive parents did not listen, and they wanted things to go smoothly. Denial was their method to deal with this.

Adoptive Parents are Angels or Super Heroes: Another narrative we see each year during NAAM is that adoptive parents are somehow better than other parents, that such a selfless act of adoption was to “save that poor orphan.”

This is a major misconception since infant adoption makes up the majority of adoptions in this country each year. In my opinion adoptive parents are not angels, super heroes, nor angelic super heroes. They are individuals who have the ability and resources and drive to adopt a child. They want a child, and they get a child. We gloss over the commodification of children that happens with the way we do adoption.  I know exactly how much I cost to adopt, and it turns my stomach to know this.

Through posts like this one in 2014, I am hopeful that NAAM 2015 will take a more adoptee-centric focus. We have a lot to say and through our collective experiences we can help effect the changes that are desperately needed.

22 thoughts on “#flipthescript 1: Why Are Adoptees Doing It?”