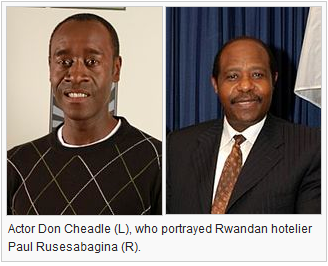 A few years ago I was teaching World Geography to middle school kids. We’d done a unit on the phenomenon of genocide, and at about the same time Paul Rusesabagina came to our city for a speaking engagement. I organized a field trip, and we all heard the first person account of the hotel manager who sheltered Tutsis in Rwanda in 1994.

Truly, his story is remarkable. At risk of his safety and that of his family, Paul Rusesabagina (played in the film Hotel Rwanda by Don Cheadle) used his connections and wiles to save more than a thousand refugees. Think the Schindler’s List of Africa.

The audience was full of gushing praise for him. Each person who got up to ask a question at the end of Paul Rusesabagina’s presentation began with some version of, “You are extraordinary.” or “You are exceptional.” or “You are amazing — I would never be able to be so brave.”

With each of these proclamations, I saw Paul Rusesabagina slump a little. Each time, he protested, “No, I’m not. My point is that I am just like you — in extraordinary times, we all can be extraordinary. We all have it in us, and I am proof of that.”

Still, the audience continued to set him apart.

I left the auditorium that day feeling sad for Paul Rusesabagina, who looked a bit lonely, a bit defeated in the way his message had been received. Who, as if to make my point, titled his book An Ordinary Man.

Now, on to open adoption parenting.

Thank you all so much for your feedback on my recent post about open adoption parenting.

But. And I say this with great affection. Some of you missed the point. The conversation I had with Tessa was not the result of me being an all-wise mom (I’m not). Or because I am more mature, thoughtful, ego-less than the average Jane (most definitely not).

It’s just that in one moment, I stopped long enough to tune into deeper wisdom. I lived from my heart, not my fears.

And you can, too.

Don’t tell me, any of you who are or will be parents, that you wouldn’t run into a burning building to rescue your child. Don’t tell me that you wouldn’t jump in front of a bus to prevent your child from being hit. We say it all the time — this type of love transcends all. And in a moment where you’re called on to do something heroic, you would not think twice.

So why would you react any differently with the relatively minor thing of resolving your own fears and insecurities for the sake of your child?

Image of Paul Rusesabagina via Jesse Jackson, Jr. in the Public domain, from Wikimedia Commons