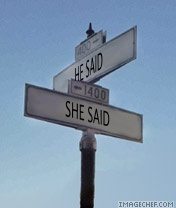 I am currently holding two completely different realities in one space.

We have entered a new arena in our open adoption. Tessa’s birthfather has come into the picture, with our blessing. Things are going very well, and I will write about the reunion more as it becomes appropriate.

But back to the box.

I remember many years ago a thirtysomething episode that featured a double-date dinner as seen by each of the four people in attendance. The first 15 minutes was from Hope’s point of view, the next segment was from Elliot’s, the third from Nancy’s and finally we see from Michael’s eyes. We see the same events interpreted by four people, with each version being very, very different.

I was left wondering which of the four versions was the accurate one. I kept trying to splice together clips to get the One True View.

So now, as I piece together the events that led to Tessa’s existence and to us being her parents, that thirtysomething episode has new meaning to me. Now I have the wisdom not to ask which account is the “real” one. And I just might have the breadth and depth to hold both versions as valid.

I don’t think either Crystal or Joe truly believe I am doing so. But I am.

I must show Tessa that it can be done.

This post is part of the open adoption roundtable in 2013. In the years since this post was first published, the various truths in our story have come closer together.

22 thoughts on “I am Schrodinger’s Box”