Liam was Reed’s first friend. They met when Reed was just 6 months old (Liam’s mom is in my Vino Support Group). They went to the same school for a few years and must have had ten thousand sword duels and gunfights over the years. 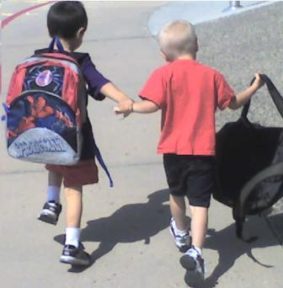 Liam and Reed on the first day of school 2007

Then Reed switched schools and though the boys stayed friends, they were no longer connected at the hip.

Reed was so excited on Friday to unexpectedly see Liam at the cross-country meet he’d been training for. Liam was running too! The boys were thrilled to be sporting together again.

But Liam’s school is configured so that he would run as a middle-schooler. And Reed would run as an elementary-schooler — even though they are in the same grade.

Liam’s group went first, and no lie, Liam found the 1.5 race really tough, as evidenced by the chunks he blew just past the finish line, and his declaration to never ever run again.

Moments later, Reed was sucking wind in HIS race, albeit toward the front-ish of his heat. At about the one-mile mark, Reed passed his dad and me, indicating that he couldn’t breathe and that he might not be able to go on. I watched him falter as he turned a corner; then I lost sight of him.

Amid the chaos of thousands of colorfully-clad kids and their their parents mulling about, a recently-purged Liam spotted his friend.

Liam picked himself off the grass and bee-lined to Reed. Liam ran the rest of the race alongside my son, urging his friend to keep going. “Stay strong!” he’d say. “Hey Reed — I just barfed! You got this!” “Don’t worry! You can vomit when you get there!” “Almost there. Finish strong!”

Reed did finish. And he DID finish strong — first from his school and 14th from his heat (out of about 60).

I was so proud of both boys.

This post is a part of #Microblog Mondays. Whazzat? A post that is between 1 word to 8 sentences long [oops!]. Head over to Stirrup Queens to join the fun.