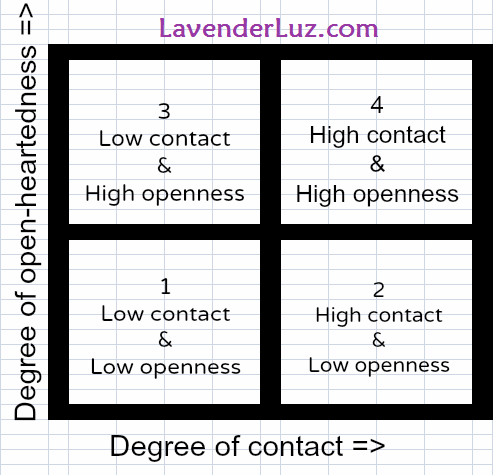 Angela Tucker, Katie Biron, Kara Andersen and I have put together this 3-minute animated explainer video for the information below, which was first published in 2013.

How Shall We Think of Open Adoption?

I bet if you asked a bunch of people who know about adoption what open adoption is, you would get variations on the theme of contact, that there is a continuum of contact, and that each adoption will find its way on to a point on the continuum. On one end might be a fully closed adoption, meaning no contact and no identifying information. At the other end people might place full openness — adoptive and birth parents treating each other as extended families.

But as we move into the third decade of open adoptions, I submit that we should stop using contact as our measure. Why?

Further, because of the need to consider contact and openness separately, we need a better tool than a spectrum. How about a grid? A grid that takes into account a measure other than contact — the level of open-heartedness on the part of the parents of the child.

Let’s look at each of the quadrants:

Which Quadrant is Best?

What matters as we set our parenting GPS isn’t where we are left-to-right on this grid. After all, we have only partial control over the level/type/amount of contact. What matters more is the elevation we operate at. The openness required by and afforded to Quadrants 3 and 4 is likely to foster healthier relationships than mere contact in Quadrants 1 and 2. Aim high!

Adopting and adoptive parents, where would you plot yourselves? Consider both aspects of open adoption — contact and openness — as you build and sustain a child-centered adoption constellation.

Feedback from some adoptive parents indicated that since they can’t fully control the level of contact with birth family, why should they be penalized for being in a less-than-ideal quadrant?

First of all, no one is being penalized. In Adoption World, it’s better to deal with What Is rather than what we wish things would be. The quadrants are meant to self-assess in a nonjudgmental way. I counsel adoptive parents to focus on openness — what they CAN control — over contact, which they only partially control. Quadrants 3 and 4 are where the benefits of openness in adoption exist.

One family may have open adoption relationships in more than one quadrant, based on differing situations with birth family members for each child.

A reader pointed out that plotting can change over time, as contact and openness can both be fluid measures.