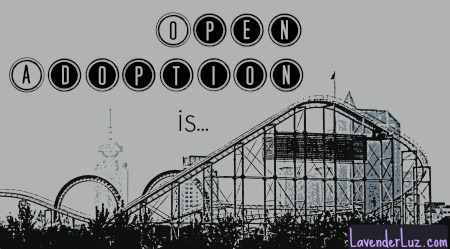 Open adoption is scary — said a mother of three, once upon a time.

But Rachel Garlinghouse figured out how to morph the fear into excitement — and embrace something else entirely. Here’s how, and more importantly, here she tells why.

When we were first waiting to adopt, we swiftly checked the “semi-open adoption” box. This meant that our post-placement correspondence with our child’s biological parent or parents would go through the agency. It meant not having each others’ last names, addresses, or phone numbers. It meant we would agree to send updates about the child, which includes pictures and a letter, on a set schedule, and the agency would forward these on to the child’s birth parents.

We interpreted a semi-open adoption as safety. As not being unexpectedly interrupted by adoption. As a happy medium. As doing our part without doing too much. We could pat ourselves on the back and move forward without too much at stake.

Our ideal adoption was changed with a phone call. We were on our way to court to gain custody of our first child when the social worker phoned me to say that our daughter’s first mother wanted to meet us. We had less than ten minutes before we would arrive at the courthouse and stand face-to-face with the woman who gave our daughter life and chose us to parent her.

Meeting our daughter’s birth mom rocked my world and made me reexamine what I “knew.” Like many who are new to adoption, I believed a lot of the stereotypes: that birth mothers are selfless and heroic because they chose adoption. That she would place her baby and move on with her life, the adoption being a point in time, not an ongoing loss. That she fit into a particular mold that has been sold to parents-by-adoption through the media and by some adoption circles: birth mothers are promiscuous, young, insecure, poor. They just don’t have it together.

Meeting a birth parent meant looking into a fellow human being’s eyes and seeing simultaneous joy and heartbreak.  It meant putting a face to a name. It meant seeing someone who looks just like her children. It meant forgetting everything I thought I knew about birth parents and embracing a new and genuine reality.

Open adoption means vulnerability. This vulnerability comes from all three triad members: the adoptee, the birth parent, the parent who adopts the child. And not just stand-up-in-front-of-a-crowd-and-give-a-presentation vulnerability. Open adoption means ripping your heart wide open and leaving it open…indefinitely. It means that despite any differences between the birth family and the family-by-adoption, they are committed to persevere, to stick with the relationship. It means beginning as strangers united by their shared love for a child and continuing that relationship in the name of commitment.

Agreeing to an open adoption is similar to getting on a roller coaster you’ve never been on before…and never getting off. There are times when the ride is steady and fairly easy, and then there are the moments of exhilaration, of suspense, of uncertainty, and of sheer fear.

It’s worth it. Every twist, every turn, every flip, every stall, every unpredictable dip and hill.

In November, we were able to spend a lot of time with our child’s biological brother and his family (by adoption).  The siblings enjoyed a trip to the zoo and a museum, a bonfire, and a sleepover. They gave each other birthday gifts. They giggled and bickered. They played with toy trains, ate popcorn and watched a favorite movie, and they laughed…a lot.

Seeing my daughter and her brother together affirms our decision to choose open adoption and most importantly, to keep choosing it. I could never imagine myself denying the pair of them a relationship, opportunities to play and laugh and bond. Their relationship is something of indescribable beauty. A rare gem.

Open adoption isn’t for every person and every situation. But what I think is important is that families who choose to adopt consider openness and it’s prospective benefits, keeping their hearts and hands open to see what beauty lands in those sacred places. Not only does openness bless the children involved, but it teaches the adults that saying “yes” means choosing to, as Christian music artist Jamie Grace sings, “do life big.” Open big and see what comes.

Rachel Garlinghouse is the mother of three children through domestic, open, transracial adoption. Rachel writes from St Louis about her family’s adventures at www.whitesugarbrownsugar.com.

5 thoughts on “Do Open Adoption Big”