It seemed like a good idea at the time.

Joe (Tessa’s birthfather), who had been absent until she was 7, had fully integrated into our lives by the end of 2008. We had spent much of that year easing into a relationship with him. It culminated with visits in his home and visits in our own home. We were feeling pretty good about the process and the outcome.

Previous posts leading up to this part of the story
Part 1: Considering Joe
Part 2: Telling Tessa
Part 3: The Horrible Wait
Part 4: The Meeting 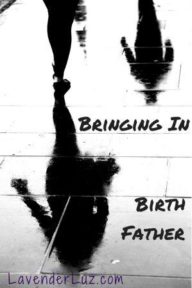 Tessa had always had a relationship with her birth mom, Crystal. In fact, as Tessa became a grade-schooler, visits with Crystal — even solo visits (without Roger or me) — offered an invaluable intangible to Tessa. After just a few hours with Crystal, Tessa would become, somehow, refreshed and restored.

So we encouraged it. Tessa would see Crystal 8-10 times a year — much like you would a good friend or family member who lives 30 minutes away.

Crystal invited our family to her home on New Years Eve day. Tessa, Reed, and her son Tyler spent hours playing and giggling while Crystal and I worked on our projects. Crystal then cut and styled Tessa’s hair, giving her an AnnaSophia Robb look.

I asked Tessa if she’s like to hang out with Joe for a few hours, and she squealed with delight.

We set it up. We met for the exchange and planned to meet up again several hours later. I talked with Tessa about expectations (we always do this when approaching a social event) and about how I would call to check on her often. We came up with a code word for her to use if she wanted me to come get her.

When I did call (via Joe’s cell phone), each time she said she was having a GREAT TIME!!

After awhile we met to retrieve Tessa our two families had dinner together. I could see that she and Isabelle (Joe’s daughter) had bonded, and that Tessa was glowing. Nothing remarkable happened at dinner.

I asked about her afternoon on the drive home She shared only two specifics: (1) that Joe smoked cigarettes (she said this with a “yuck!” — we knew he smoked and had talked with Tessa about it) and (2) that he had a friend over. They called each other “Dude.”

All seemed well and I patted myself on the back for taking yet another successful step on the path of open adoption.

Two weeks later, at bedtime, Tessa began freaking out. “I DON’T WANT TO HAVE FOUR PARENTS!!” she said over and over. “MOM, TAKE AWAY ALL THESE PICTURES OF CRYSTAL AND JOE!” She climbed up to her shelf and nearly hurled selected photos at me. Before collapsing into an exhausted heap, she ended with “MOM, YOU CALL THEM BOTH TOMORROW AND TELL THEM I NEVER WANT TO SEE THEM AGAIN!”

Sometimes things don’t stick with my mercurial daughter. But in the morning, she asked me again, this time more calmly, to call Crystal and Joe and give them her message.

I figured she meant business, and also she was gauging how much control she had of the situation. While she was at school I called Joe and broke the news, thereby breaking his heart. He put on a brave face and said he was just happy to have had the time he did. I asked if he could think of any trigger from that day. He could not.

Exploring the only thread I had to pick at, I asked about his friend, “Dude.” Joe said Tessa was never out of his sight, and that “Dude’s” visit was very brief. He was at a loss for explaining her upset, and so was I.

When I picked up Tessa from school, her first question was if I had called her birth parents. I told her I reached Joe but not Crystal. Tessa replied, “I changed my mind. I think I can still see Crystal.”

She did not want to talk anymore, so I was left in the dark as to what may have happened to change her view so dramatically.

I believe Tessa does not currently have the cognitive and language skills to figure out and communicate the reasons for her unease. It was excruciating for me to not be able to help her, and to not know what was the what. ExCRUCiating.

We had to sit in that uncomfortable place for awhile.

Next and final episode: What Was the What