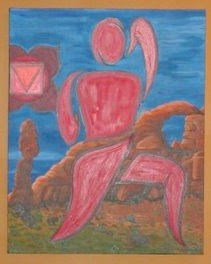 In the first post in this series, I introduced the concept of the chakras, the seven “wheels of energy” (in ancient Sanskrit) that manifest health or dis-ease in our physical and energetic bodies.

This second post, it’s all about the first chakra — the Root Chakra — which is located at the base of your spine, at your tailbone. Might you have any Root Chakra issues on occasion?

Do you have any of these emotional symptoms?

Do you have any of these physical symptoms?

Elements of the Root Chakra

The Root Chakra is where we hold tribal issues. To help explain what that means, let’s go through some specifics.

And lest you think this is just an ancient thought with no relevance in the modern world, the same idea occurred to Abraham Maslow in 1943 when he put First Chakra issues on the first step of his hierarchy of needs.

We pick up our tribal thought patterns by osmosis — they are practically in the air we breathe. These beliefs are questioned only as we begin to live more mindfully and consciously, choosing thoughts and beliefs that serve us and discarding the ones that don’t.

And tribal messages DO serve us — or at least they did at one time. We NEED to know certain things to live in the harsh world of separation, where strangers bring harm and our ways are best. Think Cro-Magnon man. Think tribes in the bible. Think Native Americans and Europeans. Think Palestinians and Jews, Tutsis and Hutus, Croats-Serbs-Bosnians, Sunnis and Shiites.

Here are a couple of messages I’ve picked up from my tribe. Do you carry any of them?

Are these beliefs absolutely true, or just tribally true?

And do they serve me now? Actually, it would be quite freeing to release some of these thoughts. Maybe I already AM rich enough and thin enough. Maybe I could choose NOT to dread my children’s teenage years. I’d like to think compassion is equally important as justice, and that all people have value, not just those who procreate. Since the only alternative to age is death, maybe I’ll embrace age, wrinkles and spider veins and all.

I’m a grown-up now. I wish to live in connection and harmony. I can choose which old beliefs to hold and honor. I’m thankful to my tribe for guiding me as I learn to survive on my own, but I no longer need it to control me.

Individuals can outgrow a belief, and so can an entire tribe. Dr Caroline Myss has a dramatic example of the The Tribe outgrowing a belief. I’ll arc the decades-long experience into just a few story boards:

In October, 1929, the American economy crashed and the Great Depression began.

Americans described themselves as being “crippled” economically. With the double whammy of a drought and bad farming practices, we also became agriculturally “crippled.”

There was a polio epidemic in the 1930s and 1940s. Children absorbed the tribe’s energy and were susceptible to the viral disease as well as the economic dis-ease.

We elected to the Presidency FDR, “a living symbol of both physical weakness and indomitable resilience” — and also a survivor of polio.

A tribal event, WWII, brought pride and power back to the country. We were “on our feet” again . We had shifted from feeling powerless to feeling powerful. Soon after, Jonas Salk discovered the vaccine for polio.

So. What tribal beliefs do you carry that no longer serve you? What would you like to shift in your life? More in The Rainbow Within Chakra Series

This post researched, in part, from Anatomy of the Spirit , by Caroline Myss, PhD.

The paintings for this series were created by Lisa Brown-Olsen. Her work is featured at Maitri Yoga, included with permission.