This morning I got a call from Dubai. Zaina is my “twin” (we have the same birthday), and one of the first people I met when Roger and I landed in Syria for our 2-year teaching stint there many years ago.

Zaina holds dual citizenship between Syria and Canada. She and her new husband just spent the summer in Calgary and Vancouver, but we had missed each other’s telephone calls. They just returned to Dubai, where they now live and teach.

Her phone call coincides with Show & Tell. With the Middle East now on my mind, I bring you some of the souvenirs we brought home to remind us of the warm people, the rich history, and the varied culture we experienced in our vagabond years. 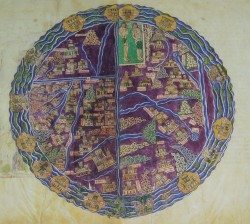 We got this print in Cyprus. It is a map of the world, which includes the prominently placed Garden of Eden at 12 o’clock. Nearby are Liban (Lebanon) Jordan, Judea, Babylonia, Armenia and Constantinople. Outlying areas include Anglia (England) at 8:00 and Scotia (Scotland) at 11:00.

These two prints were bought in Sefat, Israel, a center of Jewish mysticism. The first is the Kabbalah Tree of Life. Years later I referenced these in my Chakra series. The second are the Hebrew symbols alef, mem and shin:

Read right to left, the symbols form the word Shema, which means “hear” or “obey” and begins certain prayers. 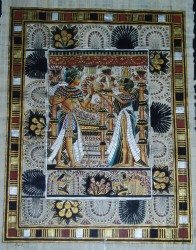 Probably no need to state that this papyrus is from Egypt. I’m not sure about the depiction, but a good guess is that it’s a pharaoh, a man-god, with his earthly accoutrements, which include his wife. 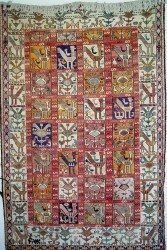 Finally, this is a carpet we got in the Cappadocia region of Turkey. It carries the “Bird of Happiness” motif.

If you ever come to my house, you will not step foot on it.

Because we have it hanging on the wall.

See what other’s are bringing for Show & Tell this week. Do you have something to share?

13 thoughts on “Show & Tell: armchair tour of the Middle East”