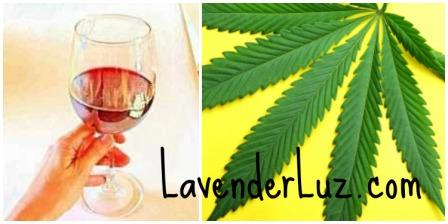 I had such fun writing my last post on talking with kids about pot, especially concocting the subheadings. But it had gotten past the length of one post, so here are some follow-on thoughts, specifically about comparing marijuana to alcohol.

Weeding out my thoughts

A few weeks ago I was interviewed about moms and kids and Colorado’s new marijuana laws by NBC’s Today Moms. The reporter was thoughtful and probing and brought up an aspect I hadn’t thought of before, a snag in my plan to simply equate using pot to drinking alcohol. Jacoba Urist asked:

Many of the moms I’ve spoken with have no problem drinking a glass wine in front of their child. But none of them would consider smoking a joint in front of them. Why do you think that is?

I had to puzzle that one out. Why would I never smoke a bowl in front of my children? I cannot fathom ever doing so. But why — why the immediate and viscerally strong reaction to that idea?

What would your answer to the reporter’s question be?

Put that in your pipe and smoke it.

For me it’s not the taking-the-edge off aspect. The kids know I have a nightly glass of wine and that I relax a bit because of it. If they choose to do the same one day — imbibe in moderation when they’re of legal age — I will be okay with that.

So why not feel similarly comfortable using marijuana in front of them?

Two insights eventually came to me. The first is that when it comes to alcohol vs pot, the delivery method makes a difference. There is the smoking aspect: I hope my children choose never to smoke, never to bring toxic chemicals into their lungs. I would not model the opposite.

Secondly, many people in my generation have spent our entire lives thinking drugs were bad, illicit, dangerous (indeed, sometimes we did them for those reasons!). There is an emotional charge around using pot.

I admit I have it. My kids — will they have it when they are parenting? Who knows. Much like they are digital natives and I am a digital immigrant, Tessa and Reed are growing up in a very different world than I did. I would never smoke a bong in front of my kids because in the back of my head, programmed into me by societal osmosis, is the thought: drugs are bad. Don’t pass The Bad onto your kids, Lori.

But. Wine is good! Wine is French and Italian and brings gaiety and fosters friendship and complements food (hey, cheese — you’re beautiful!) and makes for funny quips on Twitter and Pinterest. For me, and for others who have spent years drinking responsibly and in moderation, wine has no aura of being forbidden.

So my answers to Jacoba’s question include the delivery method and a subconscious judgment I carry, likely a product of my time.

What do you think? How do you feel about drinking a glass of wine vs lighting up a joint in front of kiddos? How are the two similar or different?

36 thoughts on “Hashing it out on NBC: More on the Marijuana Talks”