Twenty-four years ago I was halfway through a year working in Japan. I had been teaching English, traveling the country, and working out some issues by leaving my falling-apart life behind for a bit.

Phase 1 of the year was Wonder. Everything in the first half of 1989 was new and fascinating: the food, the people, the culture, the freedom. This period of growth and opening was exactly what I’d come for.

Summer brought Phase 2, which was Settling In. I felt confident enough in my language and getting-around skills to host my parents and sister for a visit in July and my boyfriend in August.

Things fell apart for Phase 3. Let’s call it Ick. I had no more visits to look forward to, I became very homesick (especially for Boyfriend), and I was bored to tears with my job. Speaking simplified English and covering the same topics over and over allowed me to practice and perfect the art of the clandestine yawn to the point where I thought my cranium would explode.

The heat and humidity were stifling to this dry-heat girl raised in the semi-arid Rocky Mountains. By the end of the summer, I was sick of sopping though my clothes ALL THE TIME. It was only after midnight that it was tolerable to go outside. Conveniently, this is also when I would gather several hundred yen and head to the international phone on the street corner to call Boyfriend, who would be available then due to the time difference.

One suffocating night, around 1 am on my way home from the phone booth, I noticed a man with a flannel jacket (??) hanging over his forearm. Odd. He began to follow me along a deserted street, and I saw that his OTHER arm was moving up and down. Rapidly. With a grin, he flapped open his first arm to show me what he was pumping.

I freaked out, even though I knew I wasn’t in any physical danger. He was a swine, but a harmless swine.

Still, I felt violated. The next day at work, I insisted that my coworker, a bilingual Japanese woman, help me make a police report.

She explained to me that reporting such a “crime” was just not done. Men will be men. Even if police DID look for the perv, even if they DID find him, nothing would happen to him. Shikata ga nai.

I insisted, and she accompanied to me to the local police station. In my mind I was quite powerful, bringing healthy feminine boundaries from America to my host country. I would save other women from this preying public crank wanker.

While my colleague stated my case in Japanese with the unamused officer, I puffed myself up with over-the-top dignity and  self-importance. When she turned back to me, however, the translation deflation hit.

Know what the police officer said, as relayed to me by my coworker?

It probably fell out by itself.

I may have fallen off my chair. All by myself.

This is a former Show & Tell post repurposed for the Generation Fabulous bloghop around July’s theme of Transformative Travel.

Recognizing the need for balance in the seasons, the YMCA of the Rockies invited my family for a winter weekend at its Winter Park location, as it did half a year ago for a summer stay at its Estes Park location.

And once again, we had an exhaustingly good time. YMCA of the Rockies really excels at offering good clean varied family fun in the stunning Rocky Mountains.

Located 80 miles from Denver, between Winter Park and Grand Lake, Snow Mountain Ranch is breathtaking in the winter. 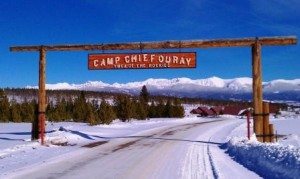 Continental Divide as a backdrop

We stayed in a comfortable and quiet lodge with no TV. After a hearty buffet breakfast Saturday morning we started with inner tubing down a hill and ice skating at the pavilion. 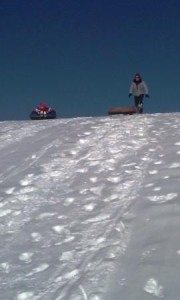 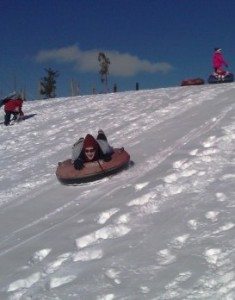 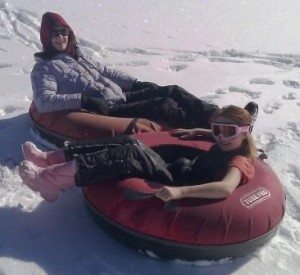 Skating in a winter wonderland

After lunch we took aim at the archery wolf. Later, the kids were literally climbing the walls. 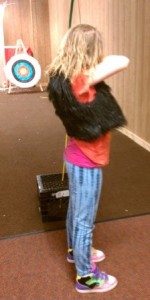 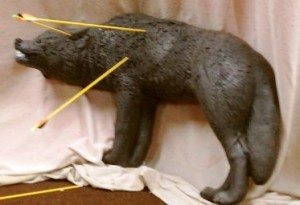 We slew the beast

Reed got a grip

Between those activities and dinner Roger went cross-country skiing, I went to a yoga class and the kids went swimming. THAT was just Day 1.

The next day we went to the gym for a morning of hoop-shooting and rollerskating. 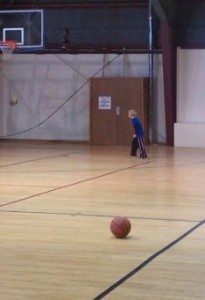 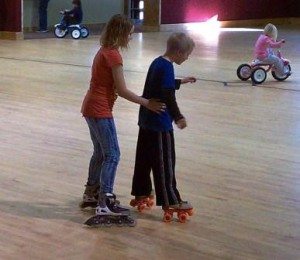 Some of the activities we’re saving for next time include dog sledding, sleigh ride, crafts. All too soon it was time to return home.

Are you envisioning your own winter vacation? Accommodations include yurts ($89 ), lodge rooms (from $119), cabins ($209 for 2 BR) and vacation homes ($349 for 3 BR). There’s enough winter left to plan your own stay at Snow Mountain Ranch. To get more ideas about families and Snow Mountain Ranch, read what other moms have to say about their experiences.

The Superbowl beckoned and it was time to head back down the mountain to get home. Now that we’ve experienced the summer and winter, the northern YMCA camp and the south one, the Y in its wondrous yin and its glorious yang, we have declared both visits extra-ordinary. We all agreed we’d love to have more weekends like this and make more family memories like these in the future.

Disclosure: My family was hosted for a weekend at Snow Mountain Ranch, which included lodging, meals and activities for purposes of writing an honest review.

I spent much of December* channeling Maria von Trapp (or, rather, Julie Andrew’s version of her). So many of my favorite things came together I wanted to burst into song as if on top of a mountain at several points during the month.

One weekend in particular, I enjoyed a convergence of some my favorite things: time with with my husband, time to myself, and travel to a place that’s new to me. A place that has good food and good music, to boot!

Roger and I had a chance to travel to New Orleans, just the two of us, for a long weekend. The afternoon we arrived we walked through the French Quarter and had a late lunch at a venerable Bourbon Street restaurant. We returned to a different restaurant the next evening for dinner. My handsome husband started the meal with a Sazerac, a New Orleans cocktail, while I indulged in a Lavender Champagne. Superbly matched to my senses. Dinner was divine.

My husband was in New Orleans for a conference, so while he worked the rest of the weekend, I walked. I visited the National WWII Museum downtown and leisurely explored the French Quarter, delighting in the sights, sounds, smells and tastes.

Perhaps the peak moment of perfection for me was brunch alone at the Courtyard of Two Sisters. A huge buffet yielded bacon, the best grits I’d ever had, spinach and bread pudding, all with Creole accents (sadly, I had to stay away from shellfish). I was seated outdoors in the courtyard, right in front of a three-piece New Orleans jazz band. Just me and my very-pleased senses, augmented by perfect weather and a good book on my Kindle. 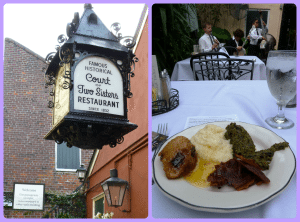 A blast of bliss. So glad I noticed it.

* Yes, December was also a tragic month, collectively, and a pall was cast. Still, perfect moments exist for each of us, ready to be noticed.

Perfect Moment Monday is about noticing a perfect moment rather than creating one. Perfect moments can be momentous or ordinary or somewhere in between.

On the last Monday of each month we engage in mindfulness about something that is right with our world. Everyone is welcome to join.

To participate in Perfect Moment Monday:

Once you make a Perfect Moment post , you may place this button on your blog.

What Perfect Moment have you recently been aware of? Visit these moments of others and share your comment love.

The next Perfect Moment Monday event will begin January 28.