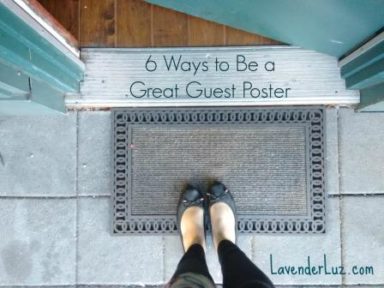 Writers are advised that one way to grow an audience is to guest post on other sites and blogs. Whether you end up working with the blogger herself or with a site’s editor, and once your offer to write has been accepted, here are 6 things you need to know to be a good guest.

END_OF_DOCUMENT_TOKEN_TO_BE_REPLACED

Maybe you’ve already heard about it. People involved in adoption are buzzing about it. It’s a new app called Adoptly, billed as “a better way to adopt.”

It’s already been dubbed The Tinder of Adoption, and as you can imagine, that has not gone over well in online adoption communities (at least not in the ones that I frequent). Swiping for children? Many have a gut response — even a gag response — to that idea. But why? I was curious within myself.

Adoptly is news now because it launched a Kickstarter campaign, including an explanatory video, to bring its app to market. At the time of writing, it has raised about 3% of its target goal of $150,000.

I try to remain open to something unfamiliar, to suspend judgment about it until I’ve had a chance to research it, sit with it, and examine at it from lots of angles. Regarding this adoption app, I did so with my friend Anne Heffron, an adoptee and fellow explorer.

END_OF_DOCUMENT_TOKEN_TO_BE_REPLACED

Yesterday I was called out as a leader of a “lynch mob.”

My last post was picked up by the Huffington Post, which is great because there it’s more likely to reach an audience that may not already have an understanding about adoption. From there, a woman named Bethany Ramos wrote a post in response on a site called Mommyish.

But before we go there, let’s talk about the word “ignorance.” The dictionary version of the word is is less emotionally charged than the way we often use it.

When I say “ignorant”, I simply mean lacking knowledge, with no intended slam against one’s intellect. With that in mind, we can now address…

How TO handle your own ignorance about a topic

My friend, Lisa, a birth mom, wrote on Facebook that the Kay commercial triggered her. Others began talking about being triggered, as well. Lisa’s friend Angela, who seemingly has no personal connection to adoption, began to remedy her ignorance by asking questions of the people on the thread.

Why can’t we see a loving family celebrating becoming parents? Why do you refer to it as separating mothers and their babies. I have not been in the situation and am trying to understand.

And people responded respectfully to her questions. Angela, open to listening, now has more understanding about  why this commercial was triggering, especially to birth parents and adopted people, and she also has greater awareness about what goes on in an adoption from the three main points of view.

How to use your own ignorance as a billy club

Melissa of Stirrup Queens calls Bethany and Mommyish out as linkbaiters:

Do you know what a lynch mob is?  Wikipedia sums it up nicely: “Lynching is murder by mob, often by hanging, but also by burning at the stake or shooting, in order to punish an alleged transgressor, or to intimidate, control, or otherwise manipulate a specific sector of a population.”  It’s a means for a dominant group to control a weaker group.

Bethany then goes on to gloat about her ignorance. I have no personal experience with adoption, but I always have thought it to be a wonderful, selfless act.

Being able to imagine herself in only one of the three positions of the adoption triad, Bethany says,

Apparently, this touchy-feely commercial overlooks all of the heartache that goes into adoption, i.e. hundreds of thousands of dollars spent on fertility treatments, as well as emotional pain and stress. I’m not denying that all of these things are true, but why are we looking a gift horse in the mouth here?

Yes, she’s able to feel the heartache from the adopting parents point of view, but had she read the Huffington Post article with an open mind, she would have remedied her own ignorance about the presence of placing parents and adoptees in every adoption situation, a stereotype that Kay’s commercial was effective in solidifying in her.

And who, exactly, does a “gift horse” represent?

Many of Bethany’s commenters go on to prove my point about ignorance, that the commercial perpetuates the myth that adoption is “wonderful” to all involved. The comments below show that like Bethany, the commenters are able to see only the adopting parents’ perspective. They’ve been further brainwashed by the commercial! They can’t seem to get that there are other people involved in every adoption, people who hurt. People who may still be hurting.

After each actual comment, you’ll see in bold how it may come across to those who were triggered.

It’s like Bethany and many of her commenters are living in Pleasantville. They love the Beaver Cleaver neat and tidy style of the 1960s, where things are in black and white and they don’t have to do with the unpleasantries and complications of too many other hues.

I ask Bethany and her myopic commenters to take a cue from Angela and allow those of us who live in color to bring shades of reality to your lives.

What responsibility does an advertiser have regarding stereotypes?

One commenter said, They’re supposed to show the multi-faceted heartbreak of adoption? It’s a bloody commercial, not a documentary.

I don’t expect Kay to teach the complexities of adoption in 30 seconds. But neither should it sell a fantasy that’s full of stereotypes and misconceptions. Yes, adoption can be something to be celebrated. But we need to see it in its wholeness, from 360 degrees, and not just the pretty Pleasantville parts. Yes, there are gains, especially for adoptive parents like me who end up with what we want. Birth parents can also gain a way out of a tough situation, and the adopted person gains a family.

But each of these positions has also experienced loss. Loss of dreams, the pruning of a family tree, the loss of a genetic line and all that was familiar. Visceral, deep, profound losses. This ad was dismissive of the loss — if the ad people even knew there was loss in adoption — and it perpetuated myths for all three parts of the adoption triad.

In the pursuit of a link-baity headline, Bethany and her frenzied followers completely missed that point.

How could the ad have been improved? I would like to have seen a set of birth parents present. Of course, you can’t give the placing mom jewelry without creating another crapstorm, but Don Draper would surely be able to figure out something, even drunk and in the 60s. Many of today’s adoptions include adoptive and birth families coming together with open hearts, connecting with each other as extended family members.

That’s something Kay Jewelers could more authentically link with its open heart collection.

I suspect that Bethany and many of her readers are pretty nice folks. They might open the door for others, pay it forward in the Starbucks drive-through, and volunteer to help their kids’ teachers with the upcoming Valentines Day parties. They probably speak nicely in real life to most people most of the time.

But some switch gets thrown when they play in the faceless Internet playground. They forget that they are talking about real people.

Bethany’s post title itself is inflammatory and offensive. Lynch mob? Chill pill? My Huffington Post piece was not designed to convert anyone to my way of thinking, but rather to show how Kay told only part of a story, badly so, while feeding stereotypes.

Bethany’s title and post indicate there’s no room in her world for people who don’t share her opinion. She tells me I need to do something. With her first dozen words she deliberately  creates a frenzy. Her followers follow and feed the frenzy shutting down the likelihood of actual dialog. There’s a whole lotta shouting going on over there and not a whole lot of listening.

And, as Angela demonstrated, being open and listening is how to remedy ignorance.