For no good reason, I’ve dumped my purse, arranged the contents so that they fit in the viewfinder’s frame, and snapped a photo.

Purple much?
Animal print much?

I found the purse itself at a Chocolate Fair (does it GET any better!?). It called my name and forced me to buy it, seeing as how it was an animal print AND had purple accents. Seven months later, I found the smaller matching purse-let (right), in which I keep my camera, my pinktooth (the teeny-weeny thing in front) and bloggy cards.

My wallet, made from the elusive purple snipe-snake, is on the left. I carry two cell phones, my purple personal one, and my plain work one.

My keys are attached to a yellow kubotan, a self-defense gizmo that gives me a “don’t eff with me” air when I carry it according to the training that came with it.

The red rectangle is a Swiss Army kit that has stuff McGyver would drool over. But it’s missing the nail file, which was confiscated at an airport checkpoint once when I forgot to leave it at home.

Lip balm, eye drops, a nail file, a crinkled up band-aid, three wet-wipes, and a bottle of flower essences (in case of illness) belong in the Singing Butler bag I got at a museum in Boston.

Finally, a purse-light and a comb.

Want the truth? This came out of my purse, too.

Runny-nose kids much? (And the purse’s attached coin bag.)

So. What’s in your wallet? If you post about it (next week’s Show & Tell?), come back and give me your link so I can snoop.

I took the kids to the Denver Museum of Nature and Science last week to experience Exhibition Health. It’s a fabulous display, enthralling for both kids (school-age) and adults alike. I found out cool things like the fact that my stride length is 3 feet 2 inches and my wingspan is 5 feet 10.5 inches (which matches my somewhat generously measured height).

There were dozens of fascinating stops, but I’ll share just a few.

To learn about the respiratory system, kids got to watch a dissection of the lungs of a sheep. I was afraid my children would be squeamish, but instead they were right in there, asking tons of questions and poking around.

There were long lines for the pièce de résistance, a photo booth that ages you up to 70 years. You can choose to also see a projection of your aging with one of three factors: smoking, sun damage, or the effects of obesity. The idea is that kids may not forsake smoking for health reasons, but they might for vanity reasons.

Here’s me:
Yikes! Aging sucks, except for the alternative.

Would you like to see Tessa and Reed in another 6+ decades? These are the BIG shockers for me.

P.S. We were told not to smile. Now, get off our lawn, you young whippersnappers!

Roger and I came upon this scene one day while touring the Syrian countryside, circa 1997: 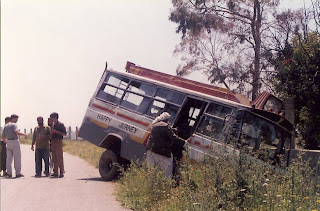 Roger speaks to some travellers about the plight of their bus, the Happy Jurney.

Clearly, when this vehicle was christened, much was lost in translation.