For no good reason, I’ve dumped my purse, arranged the contents so that they fit in the viewfinder’s frame, and snapped a photo. 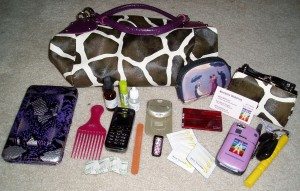 Purple much?
Animal print much?

I found the purse itself at a Chocolate Fair (does it GET any better!?). It called my name and forced me to buy it, seeing as how it was an animal print AND had purple accents. Seven months later, I found the smaller matching purse-let (right), in which I keep my camera, my pinktooth (the teeny-weeny thing in front) and bloggy cards.

My wallet, made from the elusive purple snipe-snake, is on the left. I carry two cell phones, my purple personal one, and my plain work one.

My keys are attached to a yellow kubotan, a self-defense gizmo that gives me a “don’t eff with me” air when I carry it according to the training that came with it.

The red rectangle is a Swiss Army kit that has stuff McGyver would drool over. But it’s missing the nail file, which was confiscated at an airport checkpoint once when I forgot to leave it at home.

Lip balm, eye drops, a nail file, a crinkled up band-aid, three wet-wipes, and a bottle of flower essences (in case of illness) belong in the Singing Butler bag I got at a museum in Boston.

Finally, a purse-light and a comb.

Want the truth? This came out of my purse, too. 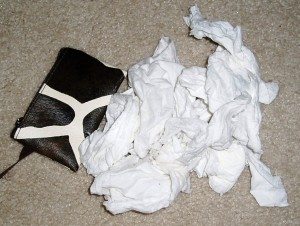 Runny-nose kids much? (And the purse’s attached coin bag.)

So. What’s in your wallet? If you post about it (next week’s Show & Tell?), come back and give me your link so I can snoop.