Yesterday was the first day of school for Tessa and Reed. It came so early that we had to leave our family reunion three days ahead of the rest of our clan.

Tessa had some difficulty letting go of my hand yesterday morning to join her first grade class, but a crow bar was found and we were finally pried apart right after the opening ceremonies.

Yes, it was heartbreaking for me to leave her there, screaming and pleading, but yoga class was calling and I mustered the courage and the zen.

The principal later told me that 15 minutes into the day, Tessa was laughing and enjoying herself immensely. She could hardly wait to get to school this morning.

Here’s my fashion gal yesterday. This girl packs the attitude, doesn’t she? 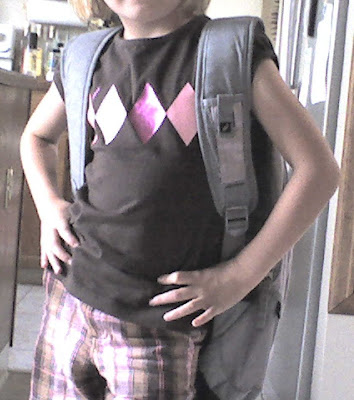 I’ve never considered Tessa especially, um, organized. But look what she did last night after I put her to bed. She got herself ready for the morning by doing this: 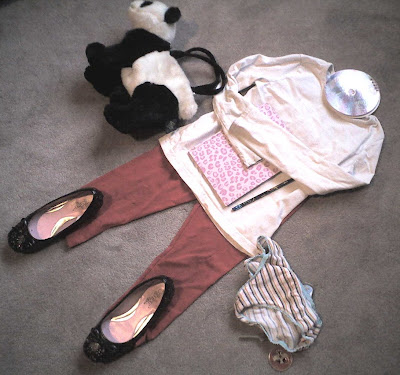 I especially like the Hannah Montana CD in place of Tessa’s head. And the panda purse.

I guess I really shouldn’t peg her to one place. She is very organized, just in ways I may not always recognize.

Reed, also true to form, took it all in stride. He gave me a big kiss and joined his kindergarten class, high-fiving his friends from preschool. When I picked him up, he said school was fine, but he wished he could play more. He then spent the afternoon playing with his best friend, Liam. For them, school is just an interlude between sword fights. 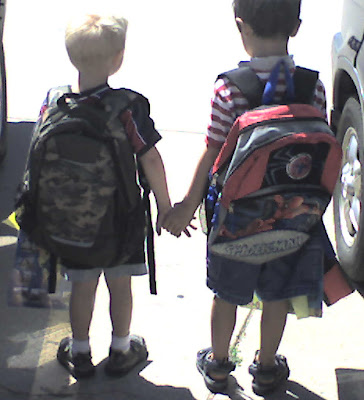 So after a free-wheeling summer, we now have Routine again. Woot!

Have something to say about 9/11? A memory, a feeling, a thought tempered by time? Do it in 100 words or less and add your patch to the Bridges quilt. Submissions due August 30. See Stirrup Queens for details.