My mother is and was an interesting person. She never took me to the dentist and told her friends I was the “mistake” on the way to Florida in late 1962. Thanks mom, love you too… I used to wet the bed and to teach me a lesson, she’d hang my soiled sheets outside for all the small town folks to see. I once came home bloody and dirty (how I spent most summers) and seeing me in my condition, she whacked me over the head with a hair brush to continue my lessons.  Couldn’t she just kiss it and make it all better?

We moved to Chicago right after they married. I left everything I knew (small town of 200) and moved to be with 3 million new people… new people that were nothing like small town me. I went to a private religious school and learned about God.  We lived in a 13 story building that was right on Lake Michigan. I’d walk by myself several blocks to buy my Batman and Ironman comics. Then it was time to move again.

We moved back to Wisconsin to another religious school. I graduated with less than average grades (the start of being a failure to my new dad) and at 18 my drinking began. I went to college (Associate of Arts, not Associate of Science that Ron wished for) and met my “soulmate” in 1985… Why didn’t I know it then? She will ALWAYS be the one that got away.

I got my DUI in 1989, continuing on the path of failure my parents saw me on.  I got remarried in 1996 and divorced in 2001 and my drinking really ramped up. Then my bankruptcy REALLY made my parents proud of me in 2007. My father passed away shortly after that and my mother said I ruined her name by being bankrupt.

While in my studio apartment, I began to horde empty beer bottles due to being totally ashamed of my drinking and what I had allowed it to cost me: two marriages, a daughter I barely know, and the mother who never wanted me from day 1. I had a little path that became my walk of shame every day. I hated coming home and never opened my blinds. I hated myself and what I had become: my bio father.

I asked “God” to save me because I couldn’t save myself.

So on Friday, October 24th, 2014, God must have plugged up my shower drain. I’m a maintenance guy and I couldn’t fix it.  Funny, I can fix almost anything, except myself. So my landlord came in to fix the drain and saw how I was “living”.

He asked me if I was okay. Not really, I said. We talked outside for an hour and I cried like a baby. He supported me. He talked with me, never to me. That Sunday I took my last drink.

By February of 2015 my apartment was clean and my blinds were open. My affirmation came on day 2 of my sobriety when I went for my 4 mile run and my feet never touched the ground. I knew I “had it.” I was free of alcohol and the shame I had carried for so many years.

I made amends with friends and family (though my mother still hates me and said that if I ever stopped at her house again, she’d have me arrested) Thanks mommy… Love you too. 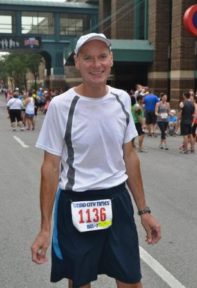 In the end, I’m a better ex-husband and am getting to know my 18 year-old daughter. I ran 4 marathons in 2015 and will complete 5 this year. I have an amazing career with the local school district and am a caregiver at a senior living facility. The feeling of not being wanted and abused fuels me to make sure I care for others.

I’m a product of abuse, adoption and addiction.  The symptoms of these afflictions are sometimes hard to see and cure, but at last, I’m okay with their side effects.

Michael Glen Schwerman stands at 6’5″ and is a marathon runner, custodian, and caregiver. He wears size 17 shoes.

7 thoughts on “#flipthescript 11: Abuse to Adoption to Addiction to Affirmation”