Boy, we get ourselves into a frenzy every four years, don’t we? By “we” I mean Americans and by “frenzy” I’m talking about the our shared and increasingly destructive quadrennial experience that turns friends into foes, normally pleasant people into rabid haters (or at least Facebook de-frienders), and polarizes our country to the point that we struggle to talk about the candidates civilly, let alone the issues.

During the last presidential election season, I asked my readers to back up from the battle over candidates and examine instead their values around certain issues. And then match those values to what a range of candidates say about and how they have voted on such issues. OnTheIssues.org has configured a way to compare your values with those of various candidates (wider than the handful we are now down to).

(Let me take a moment to thank those of you who answered my four values questions last week. I enjoyed learning what you believe and why you believe it. I have finally added my own response.

Your turn to take the vote match quiz

Go ahead. There are 20 quick questions over four broad topics: Individual Rights, Domestic Issues, Economic Issues and Defense/International Issues. It shouldn’t take you longer than a minute or two.

For each issue, you can click to get clarification, as I did when I needed to know what was meant by “family values” being taught in public schools. Sometimes we throw terms around without having a common understanding of them. I mean, I want my family’s values taught in schools, but maybe not that family’s. For this question I clicked and found that it meant “Strongly Support means you believe: Judeo-Christian values are American values” and “Strongly Oppose means you believe: Separation of church and state precludes allowing school prayer.” I could also see the points in between the two stronglies and select where I most closely fit.

My top two matches and a few surprises

As in 2008, there were some surprises on how my VoteMatch test turned out. My guiding principle is freedom, both personal an economic, so there was no surprise in my top-matching candidates — Gary Johnson (60% match) and Ron Paul — except perhaps in the order they turned up. But I was surprised that Hilary Clinton matched me 2 percentage points better than Mitt Romney (mostly due to social issues) and that Barack Obama and Paul Ryan were tied at a 35% match to my values (though if economic issues were weighted more, Ryan would have had a higher score with me). And guess what? Sarah Palin was at the bottom of my list (18%). Not what you’d necessarily expect from someone who is still a registered Republican.

(And no, I don’t identify any better with the Democratic party. Neither major party seems to value or protect our economic and personal freedoms.)

So, who are your top two candidates and what surprises came up in your results?

If you’re a political junkie, you can also plot yourself on the Nolan Chart. Where do you fall? 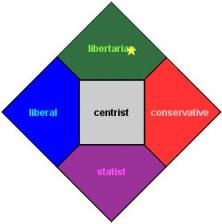 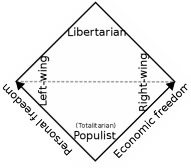 15 thoughts on “Vote 2012: How well does your candidate really match your values?”