It was more of a wail than a directive, “him” being my son and “Coach” being my husband. Reed is playing basketball and has just taken a spill. He is all right, but my heart is pounding, as he is playing injured tonight. Earlier in the day he’d had his chin sewn up, thanks to a fall off his bike. He’s been complaining of road rash elsewhere on his body, but not enough to sit out his game. He loves basketball more than just about anything.

I am so afraid Reed will bonk his chin on the court. The thought itself makes me wince.

My request sets off the 16 year-old girl sitting on the bleachers in front of me.  She leans over to her mom and says something I don’t catch. But my daughter hears her “Eff You, Bee” remark. Defending my honor, Tessa rises to the bait: “Don’t be rude!”

The girl’s mom, as if spring-loaded, lays into Tessa, “YOU’RE BEING RUDE! Shut your effing mouth!”

Never one to back down, Tessa matches the woman expletive-for-expletive. All while I’m trying to get my daughter to hear my more moderated voice directly in her ear, “It’s OK. Stand down. De-escalate. Stop. It’s all right, Sweetie.”

The inflamed woman is now inviting 13 year-oldTessa to take it outside. It’s taken only about 4 seconds to get from my “Take him out, Coach!” to the mom’s  “Ya wanna go at me!? Let’s go outside! Let’s go!” The woman is practically beating her chest at my daughter.

My own mom gets involved at this point, touching the woman on her sleeve and saying, “C’mon. You’re the adult here. Let’s calm things down.”

That douses the woman’s ire. She sits back down and we don’t hear from her or her daughter for the rest of the game.

My entire body is pulsing with adrenaline, and my brain races to to make sense of what’s just happened. The daughter must have thought that I was calling for the OTHER coach to take out HER brother, who was on the OPPOSing team. She knee-jerked based on a faulty assumption, and before anyone knew what was happening, she and her mom were ready to fight. Like really fight!

I feel my blood start to boil. I envision my formerly peaceful self doing all sort of uncharacteristic things. I’m sizing these two up, determining that, in fact, I CAN take them. At least the mom. All those turbo-kickboxing classes are about to pay off. Tessa can totally take the daughter. I even fantasize a scene in which I say, not even in my own voice, I’ma cut you! (as if I even had a knife on me). I’m debating whether my first blow will be a jab or a roundhouse kick and just how much damage it will do on impact.

Damn, I’ve got a badass inside me! 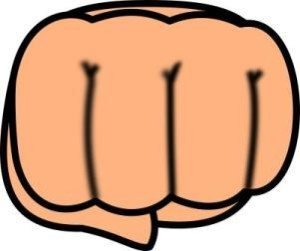 Our team is winning, and Tessa and I gleefully cheer obnoxiously loud at each basket made by our boys. At the final buzzer we have won by 9 friggin points. Take that b*tches!

Have you ever had your dormant pugilist awakened?

This post is a part of #Microblog Mondays. What’s that? A post that is not too long. Head over to Stirrup Queens to join the fun.

15 thoughts on “The Badass Inside”