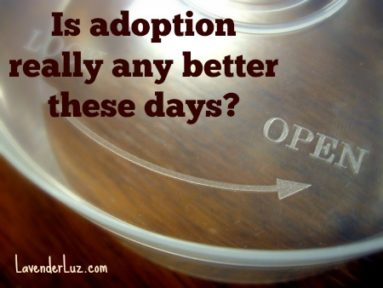 Question: Everyone says that adoption is different now than it was in previous eras.

Is it really? Is it actually different for adoptees? Even with open adoptions, the adoptee will still have to process all it means to be adopted. Are the adoptive parents really ready and willing to do this alongside their son or daughter?

I see posts from adoptive parents that show they can’t or don’t want to deal with issues of rejection or low self-esteem or the whys of adoption. They don’t say that, of course. Instead I see them congratulate themselves for helping their child stop feeling those feelings, but it seems to me that they’re really stopping the child from expressing those feelings.

The adoptee’s needs cannot be met when adoption is hyped as solely a positive event. Until parents treat it as a neutral fact of how they build their family, and until they deal with their own stuff and acknowledge the complexity of adoption, the adoptee experience is not much changed.

Really. Tell me how adoption is different these days.

Still in the Dark Ages?

Dear TAO:   This is such a worthwhile issue to ponder. You’ve had me thinking about it for several weeks.

I admit it. I get discouraged sometimes about how in-the-dark some still are about adoptive parenting, how stuck in the closed era the general mindset still seems to be. As a result, many come to parenting ill-prepared for the challenges of raising a son or daughter who, because of adoption, has experienced a split between their biology and their biography.

Is it because some states don’t require enough in the way of education about adoptive parenting? Indeed, many states don’t even require that a licensed adoption agency be involved. And when one IS involved, is it adequately preparing its clients for the “marriage”  —  long-term parenting through the ages and stages of an adoptee processing her adoptedness? Or does the agency focus primarily on the “wedding” — the short-term goal of filling the crib?

I wonder if too many agencies perpetuate the “as if” paradigm, that we can all act as if an adoption hadn’t taken place, that transfamilial parenting is no different than biological parenting. Too many hopeful parents do not understand that there IS a difference — especially to the adopted person.

(There are, of course, some agencies who ARE trying to raise the bar and better educate their clients on the realities and complexities of adoptive parenting. I give them shout outs on occasion.)

Still, there encouraging signs. Activists are effecting change in state legislatures across the country, as one-by-one, states restore the civil right to adopted adults to access their own birth records (Texas, you ARE going to open — you all will).

In addition, the Washington Times reported a few years ago that “95 percent of U.S. infant adoptions now have some level of openness between birth parents and adoptive parents, unlike earlier decades, when such contact was routinely denied.”

This is encouraging, right?

Not so fast. It can be perilous to confuse true openness with mere contact. As I’ve said before, “if you have contact between families but are not also parenting with mindfulness and attunement, you may be inviting in complexity (contact) without having ways to deal with such complexity (openness, mindfulness, intentionality).”

I saw this evolution in my self. At first, I thought that contact was the salve that would prevent problems for my kids. Now I see that in some cases, contact can actually ADD to problems, or at least to complexity. I now see that adoptive parents need to parent with openness, an ongoing cultivation of an open channel between themselves and their child. Which means parents remain aware of what’s going on inside them. Which means parents continually scan for their own triggers and hot buttons and defuse them, before their child finds one.

Out with the Old; In with Adoptee-Centered

When people know better, they do better, and thanks to the uprising of adoptee and first parent voices, we now know so much more than we used to about the effect of adoption — and of closedness and openness (not just contact) — our on our children.

But it’s still up to adoptive parents to take the information and use it all along the way.  Getting a baby isn’t  the end of the story — it’s just the beginning.

One reason I wrote my book was that I knew there were thousands of adoptive parents who wanted to do better but weren’t sure how. I am pretty sure most parents want to do the best they can by their kids. We need to replace the old closed paradigm with something that is more adoptee-centered.

Calling on readers: Do you think adoption is better these days? If so, how? What do you see that’s working?

40 thoughts on “Is Adoption Today Really Better than Before?”