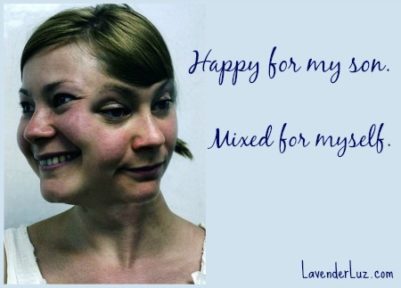 A year ago I published a letter from Charlene that explained her son had found his birth mother and they had all attended his college graduation. The reunion had gone so well that the son had decided to move to another state to live with his birth mom and get to know his biological family.

Charlene was happy for her son, yet also had many other emotions and was feeling confused by their coexistence.

That post resulted in a lively and helpful discussion. Charlene wrote in this week with an update, and she doesn’t mind that I share it with you. We both feel there is value in seeing what happens when a person has no choice but to trust the process (well, I suppose you can fight the process, but in adoption that rarely ends well).

It has been about a year since my son reunited with his biological family and moved thousands of miles away to another state to live with them. We visited him there twice and he was home last Thanksgiving briefly.

There were months when I doubted what my role was to him. On bad days I doubted if he thought I ever was his mom. On my good days I knew better. I never stopped encouraging him on his journey and being happy for him.

After 12 months there and feeling stalled in carving out a career path, he has decided to come back to his home here to figure it all out. He arrived this morning.

Our relationship with his biological family has grown and meshed and we are in a comfortable place, with respect, gratitude, and boundaries, many of them his. I am now fully able to acknowledge that he is my son and he is his birth mother’s son.  He is going through life, like all of us, trying to figure it all out .

All my best,
Charlene

From Either/Or to Both/And

Thanks, Charlene, for sharing your unique experience. You are further along in this parenting journey than I am and with this letter, you have taught me a little bit about letting go and about what truly binds people together.

From one of the comments on the original post: If he comes back to you, great. If he doesn’t, then you know that in his heart he was never really yours to begin with.

So…great. I suppose then we can infer that he was yours to begin with. While you have always claimed your son, now you know your son claims you, too.

The bigger point, however, is that expanded claiming has been taking place, to the benefit of your son.  After your year of reflection and big emotions, you say he is my son and he is his birth mother’s son. You and your son’s birth family were open to making the shift from an Either/Or mindset to the Both/And heartset, one that enables the adopted person to claim and be claimed by all his people.

I love how his birth mom’s family welcomed you, Charlene, as an extension of their love for him. I love how, now that he’s back with you, he can “keep” his birth family members, as well. You have all worked together to ensure that he doesn’t have to choose.

I’m sure there’s a lot more complexity to your year of emotional upheaval than you mentioned in your letter, but I am thrilled to know that as for the broad strokes, you all were able to keep your beloved son at the center of your intentions.

And that sometimes, trusting the process works out just beautifully.

36 thoughts on “Update: the Mom Whose Son Left to Live with Birth Mom”