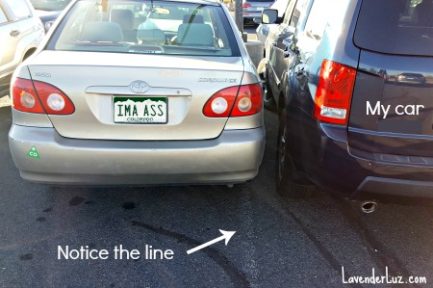 The parking lot was not full when I drove up. I slid into one of many available spots, grabbed my mat and headed in to a yoga class. I got some exercise, met my physical and mental edge, practiced staying present, and closed with a moment of stillness.

That last step was important.

Because when I came out  to my car, this is what I found.

My zen evaporated and a rush of anger come over me. I stormed back into the gym, thinking of all the ways I wanted to make this jerk pay for their transgression. Jackass.

The front desk paged The Jackass by license plate number. I waited by my car for several minutes, desperately wanting to know what such a high-order jackass looks like, but no one came.

Perhaps because I’d just come from savasana (corpse pose, where we attempt to find stillness), I began to observe myself.

I noticed that I wanted revenge more than I wanted to get on my way. My primary need had become to key The Jackass’s car, not to get into my own. I had visions of chewing out the offender, which were extremely satisfying, but would come at the expense of meeting the obligations I had on my calendar that morning.

So instead of waiting for The Jackass to finish their workout and appear so that I could spew my righteous anger all over them, I got into my car on the passenger side. I reaaaaaally struggled to overcome the intense INTENSE urge to mark up that car. I imagined myself being seen doing so on the security videos and was able to stop myself for legal reasons, not for moral reasons (it’s still wrong to key a Jackass’s car, isn’t it?).

I went on about my day but couldn’t stop thinking about The Jackass. I wanted to tell everyone about it. Like a mosquito bite that never quite stops itching, my mind kept going back to how I was victimized by The Jackass.

Scratch that. The mosquito bite DID stop itching. But whenever it did, I’d keep reactivating it . This is a really strange thing. Why did I keep choosing to feel hyper-angry?

Because self-righteous anger felt so gooooooooood.

I was hanging on to being a victim of The Jackass because it felt good. How messed up is that?

Once again, I had competing needs and was at cross purposes with myself. It wasn’t until I asked out loud, Lori, is this obsession serving you? — that I was able to choose to reclaim my day and consciously decide not to give The Jackass any more of my attention.

But I did get a satisfying little kick out of writing this post.

Have you noticed a time when it felt good to feel bad? When was the last time you chose to hang on to bad feelings longer than you needed to?

16 thoughts on “I Got Jackassed. TWICE.”