Mr Roads gave me a C in Art in 7th grade. Ba$tard.

Being an otherwise straight-A student, I took this as a personal affront. It stung so much that I decided I had no artistic talent and I would never again put myself in the position of being judged in this arena (perhaps I am a person of sweeping generalizations?).

My moratorium held up until 5 years ago, when I was invited to a baby shower for MaryBeth. I almost didn’t go because it was at one of those (scrunch-up my nose) pottery-painting places, for those, you know, artistic-type people.

Which wasn’t me, according to Mr Roads and the message I’d played in my head for decades.

But my affection for MB was greater than my fear of being judged (really. like anyone would care) and I went to the celebration.

And I found a new passion. I LOVE painting pottery! And I don’t stink up the place when I do it.

I don’t take the time to paint pottery very often. Which is a shame considering how much satisfaction it brings me.

Today I’m sharing pieces of my cityscape series, which I did in 2004. This was a very stressful time, as Tessa was in the Terrible-Threes (much worse than the fabled twos), Reed was mobile yet fully dependent on me, and Rob was in grad school. I soooo needed this outlet. 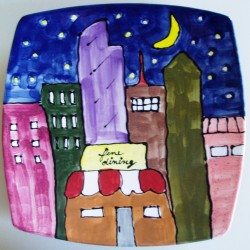 The serving bowl with a tortilla chip: (I could point out that I ran out of time and didn’t have a chance to do a third layer of color so it’s not as vibrant as I’d like, but that would be Mr Roads talking): 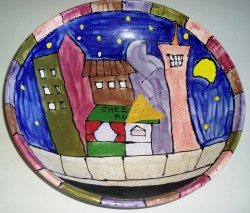 The jumbo coffee mugs (there are only 2, but I took them pix from different angles): 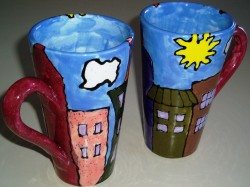 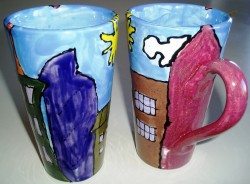 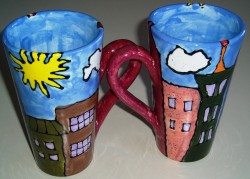 I think it’s time for me to hit the studio again. Any locals want to join me? (Anyone who isn’t Mr Roads, that is.)

To see what the rest of the class is showing and telling, go to Mel of Show & Tell.