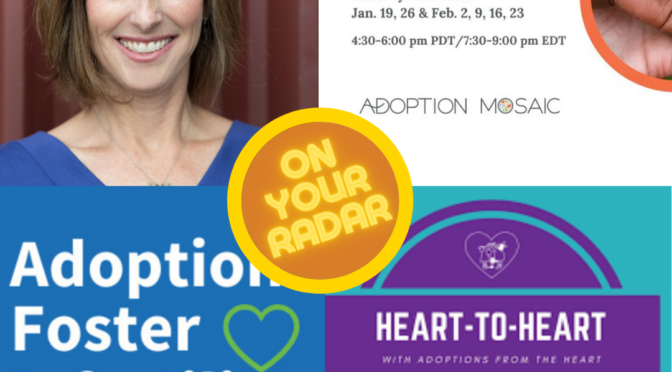 1. Review of a new adoption-themed novel

Please read Sara Easterly’s courageous review of The Nature of Small Birds, published in Englewood Review of Books. I say courageous because Sara herself is a writer in the Christian writing space; she takes no pleasure in exposing another Christian writer’s blind spots in crafting a novel about an adoptee from Vietnam.

Considering adoptees are four times more likely than non-adoptees to attempt suicide, it’s critically important that literature about adoption is held to a higher standard than it traditionally has been—especially in Christian circles where hurtful adoption messaging can be so prevalent.

Sara details 4 main problems that affect the mental and spiritual health of adoptees, and they are striking.

A 6-week course on Transracial Parenting starts Jan 19. A course on Tough Conversations is coming in March. Check out the rest of the offerings and adoption resources from people with lived experience here.

END_OF_DOCUMENT_TOKEN_TO_BE_REPLACED

Jill takes on the controversial topic of enforceable open adoption agreements in Openness and Contracts. Her view of  it may not be what you might expect from a birth mother.

An enforceable openness contract would have made me suspicious of any contact I got from P and M. The openness I have now means the whole world to me, because it comes from love rather than legal obligation. If there were a contract, I would always wonder – did I get a picture and an update because P and M wanted me to have it, or because they felt like they had to give it to me?

…My conviction had to be about what Roo was going to get out of adoption, not about what I would get from it. My choice for her wasn’t open adoption. It was simply adoption. Openness was a happy by-product, not the end goal.

The thing is, I trust P and M to make choices for Roo that are in her best interest. If I didn’t trust them to do that, I wouldn’t have trusted them enough to place her with them.

…If a couple needs a legally enforceable agreement to tell them to be decent and kind and respectful to the woman who gave birth to their child and then broke her own heart to give that child the best life possible, open adoption or no, then they have no business adopting.

She further explores the shades of gray and her commenters engage respectfully. A worthwhile post for anyone interested in open adoption.

Luna deliberately steers a conversation about where babies come from toward an adoption talk with her 3 year-old, Jaye. In Simple When It’s Anything But, Luna responds to the question “Why I not grow in Mama’s belly?”

Her thought processes are insightful:

Children ask what they need to know. They only ask what they are ready to hear. She wasn’t asking why I was her Mama. She wasn’t asking why Kaye was not her Mama. She was asking why, if babies grow inside their mamas, she didn’t grow inside my belly. Complicating my answer was the baby sitting in the high chair to my side. I knew I had to take Baby Z into account, even though the question was not about her. Or was it? Was she also thinking ‘how come I didn’t grow in Mama’s belly too?’

More important than what Luna said (which was clear and appropriate) was that she broached the subject. That she demonstrated for her daughter that such things can be talked about, wondered about.

Rebecca, adoptee-in-reunion and adoptive mom, also touches on messages adoptive parents can impress into their children, sometimes unwittingly. In Shrugging off the Shoulds and Shouldn’ts of Adopted Life, Rebecca says,

My parents were well intentioned, and they were doing the best they could with the tools that were available to them at the time. But the unintended result was there was no acceptable place for the feelings of “not belonging” that naturally arose in me.

The comments on this post are also instructive for adoptive parents on ways to either entrench or help shake off cultural messages about adoption.

In the same vein, we hear another facet of unsaid messages that can pass from adoptive parent to child. Racilous, a birth mother in an open adoption, says in Sometimes I Leave My Happy Place to Interact with People I Disagree with:

But there is another breed of adoptive parents out there, those who refuse to listen…they just think and know their way is correct, that they are the child’s parents (they may even stick the word real in there) and he/she won’t need anything but them. They spend 18 years objectifying the birth family, nullifying any connection, and then when the child is an adult says “well I would never do anything to stop you from searching now”, never acknowledging that they spent 18 years drumming it into a child’s head that they shouldn’t care about who this other family was. These kinds of adoptive parents make me feel really bad for their kids.

We parents should remain ever-mindful of the messages we may hold and unwittingly transmit about adoption, our children’s biology, and what we value and validate.

Thanks for joining me for this edition of Very Important Posts.

Amanda resists the urge to bang her head against a wall when someone tells her, “So go look at your birth certificate!” at Land of Gazillion Adoptees. Think about the nails-on-chalkboard phrase to infertile people, “Just adopt!” and you’ll get a sense why this grated so.

My birth certificate, gee, now why didn’t I think of that?  The problem is, someone else already did and they sealed it away from me.  I have a choice here.  I can reply “oh OK” and change the topic.  Alternatively, I can explain “my adoption and birth records are sealed.”  This option a great deal of the time ensures that the person I’m talking to will immediately transform into an adoption-records-expert and reply “oh, well that’s probably because she doesn’t want to know you.”

Amanda gives a brief history of the sealing of adoption records (hint: it’s not to protect the adopted person) and it is illuminating for anyone involved in adoption.

Oh, and next week is the Adoptee Rights Demonstration in Chicago. Support in any way you can, including making a donation.

In Loss, we meet again, Other Mother shares how a new loss reveals the hurts of an old loss.

I found it poignant how she also addresses feelings of regret.

Luna re-tells the birth story to her 3 year-old daughter as they drive by the house where Kaye gave birth to Jaye, the daughter Luna and Kaye both claim. With each telling, Luna is able to add more and more details. Luna explains in Evolution of the Story how she handles the inevitable “whys” — and how, through open adoption, she hopes won’t have to handle them solo through the years.

Some day, though, I know she’ll be asking “why” again. Why did Kaye ask us to be her Mama and Dada? Why did we take her home? Why couldn’t Jaye stay at her Grandma’s house where she was born? So many “whys” she may one day wish to know. I’m grateful I won’t have to answer all of those questions alone, that I can turn to Kaye to tell her story too.

Be on the lookout for what you consider Very Important Posts during the month of August — I’d love to know your nominations for the next edition of VIPs.