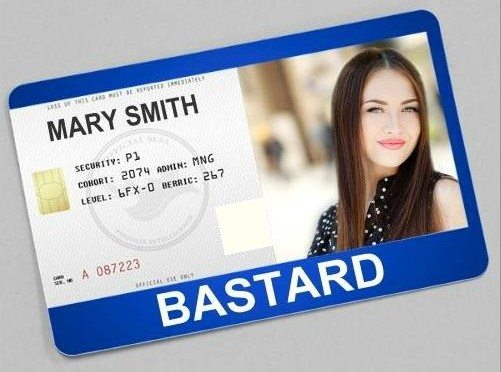 As you may recall from my last post, Tessa and I began a conversation about the meaning of the words bitch and bastard. We covered the terms and I was feeling confident.

Until she said the words expressed in the title of this post. That means I’m a bastard, right?

Though it was clear there was no negative meaning granted by her (it was said matter-of-factly, as she was just trying to put pieces together the way kids do) I myself felt a shock at the declaration and was unprepared both by my reaction and how to proceed in the discussion.

So instead of showing my discomfort or handling it inadequately, I pointed under a chair and said, “Oh, look! Is that bit of tinsel left over from Christmas?”

OK, I made up the tinsel part. But I did use the Shiny Things tactic because is tends to be as effective as it is sneaky.

As my readers pointed out, the conversation did need to be gotten back to. So during a relaxed time together yesterday, I broached it anew.

But this time, I was guided by the collective wisdom of those of you who kindly stopped to leave your insights.

Tessa is breathless, taking a break after dancing for the umpteenth time to Journey’s Don’t Stop Believing in our living room. I’ve been masquerading as the entire audience at Radio City Music Hall.

“Tessa, do you remember the other day when you asked about the word bastard?”

“I’m wondering how you heard it used.”

“A 6th grade boy yelled it at a guy who stole a basketball from him.”

“Oh. So what do you think he meant by that?”

“That he was being mean.”

“Yeah, that he was being a jerk, right? That’s usually what people mean when they use that word. It’s kind of like the male version of bitch. And you know that both words are meant to hurt and are very disrespectful and very inappropriate.”

[And that mommy only uses them when stupid people in stupid BMWs cut in front of her when their lane ends, even though they had plenty of chance to merge sanely way back there and not come thisclose to hitting mommy’s car in a stupid game of chicken. But I digress.]

Dramatic: “I know that, Mommmmmm.”

“And you also know that bastard can mean someone who was born to parents who weren’t married, right?”

“Yeah, like Crystal and Joe weren’t married when I was born.”

“That’s true. You know, I always thought it was crazy to have that word be about a kid — even a baby — when the baby really didn’t do anything except be born.”

“Mom. It’s not like they’re saying the baby is a jerk.”

“Of course not. No baby is a jerk. But in the olden days when unmarried people were not allowed to live together, it was a rude word that described a child born to them.”

“I know, Mom. You’re telling me not to call people names, right?”

[Unless they are really, really stupid drivers.]

“You’re so smart. Hey, another thing. The other day you wondered if you were a bastard. What do you think?”

“Wellll…I kinda am because of Crystal and Joe. But I’m kinda not because of you and Dad.” (pause) “But I definitely am not a jerk.”

“These days, we don’t talk bad about children for anything that’s really about adults. So no, I cannot think of any way that anyone would consider you a bastard.”