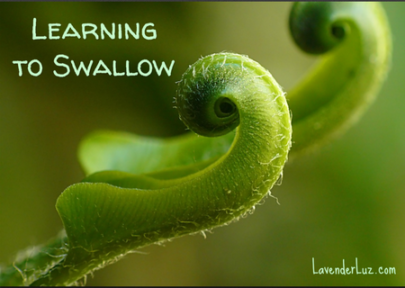 I never got that memo.

I had no clue I am a tongue thruster. Nobody ever told me. Not my pediatrician, not my dentist, not my first orthodontist when I was a teenager. Even my mom was surprised when I told her recently.

It wasn’t until my current orthodontist said that unless I correct this Very Bad Habit I’ve had for my entire life (also called “immature swallow” — responsible and straight-A me flippin’ adores that diagnosis), all the time, trouble, and expense of Braces Round 2 will be for naught.

What’s the big deal about a problem I never knew I had?

Well, tongue thrusting leads to what’s called an open bite. It means that even if I have straight teeth, I could  still have a misaligned bite. The top and bottom teeth, each straight on their own, won’t stay lined up. Teeth will continue to move out of alignment, eventually leading to dental distress.

“Most people swallow between 800-1500 times each day. A person with a tongue thrust problem exerts at least a pound of pressure against the teeth every time he or she swallows. “ Source.

In more severe cases, immature swallowing can be inefficient, ineffective, and downright sloppy. It can impair a person’s speech.

Why Did This Happen?

Though I feel like a freak — and an immature one at that — maybe I’m not.  One site says that a tongue thrust type of swallow “is present in all babies, in about half of the population of 5-year-olds, and in about one third of 8-year-olds; it is also present in one-fourth to one-third of adults.”

I find myself in speech therapy. Not exactly learning to speak, but relearning how to swallow. I should have started earlier on in my current orthodontia journey because I won’t be getting my braces off until I figure this out.

At first, I thought how hard can this be? All I need to do is stop touching my tongue to the back of my teeth. And I did become more mindful. I did reduce the tongue thrusting. But not by much. Amid the movement promoted by my orthodontia, I could feel the countermovement still being caused by my unruly tongue.

Turns out it’s not just a matter of paying better attention. It’s a whole process of retraining.

“Trying to do this [on your own] does not usually result in a permanent change. Learning the new swallowing technique involves more than a position change. It is a series of movements requiring the coordinated efforts of eight oral-facial muscles. Normally, people with a tongue thrust problem use only one or two muscles.” Source.

So yay. I’m getting “myo-functional tongue thrust therapy” every week to strengthen and recalibrate different parts of my tongue, lips and jaw. The therapist has me practicing slurp swallows (fore-tongue), cha-cha swallows (mid-tongue) and kick swallows (back-tongue). Three times a day I do a set of that week’s exercises.

In this I am not immature. I am diligent. I will catch up to all those 8-month-old babies who got the memo.

Do you have experience with tongue thrusting* or an immature swallow*?

* I swear this post is not a sly attempt to get pageviews from googling pervs.

12 thoughts on “Learning to Swallow”