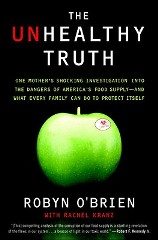 Along with some other writers, I was invited to lunch one day in July with a woman named Robyn O’Brien, founder of AllergyKids, for an event sponsored by Stonyfield Yogurt  — which, to its credit, seemed mostly interested in getting Robyn’s word out and not so much in promoting its product.

I had no idea who Robyn was, but I can tell you that she rocked my world.

If you’ve read my last two food-related posts, you know that I was ripe for Robyn’s message. I had already decided to eat for my ayurvedic dosha and eat cleaner food (meaning reduce my intake of processed/refined foods). But what I learned that day gave my efforts some urgency — not just for my own health but for that of my children, my parents, and my loved ones (you included!).

The invitees were given Robyn’s book, The Unhealthy Truth, and many of us are participating in this blog hop, probably with differing views. So after you’re finished here, please hop around for others’ perspectives (links at bottom). Thanks to Stonyfield, there is a giveaway basket being offered on each participating blog.

verachiever Robyn O’Brien unleashed her inner Erin Brockovich several years ago when a routine breakfast served to her four children (toasted waffles with syrup, tubes of blueberry yogurt and some scrambled egg) ended with her youngest, in a high chair, enduring full-blown anaphylactic shock.

Once the crisis was over (the daughter is fine but has some severe food allergies), Robyn, trained as an equity analyst,  put her research skills to work. She found that from 1997-2002, the number of children with peanut allergies doubled. She explains that food allergies happen when a person’s immune system sees a protein as something foreign and it launches an inflammatory response to drive out the foreign matter.

Her next question was, is there something foreign in our food that wasn’t there when we were kids? She learned that yes, beginning in the 199os new proteins were engineered into our food supply.

Robyn found that in 1994, scientists created a synthetic growth hormone that helped cows make more milk. No problem there — societies have always tried to get more output for the input, especially when it comes to keeping their people fed. Unfortunately the growth hormone also mad the cows sick, which required the use of antibiotics.

When faced with imports of engineered US milk products, governments around the world erred on the side of caution. Because the new science had not yet been proven SAFE, these governments would not allow US dairy products into their food supplies. The US, on the other hand, said that since it hadn’t yet been proven DANGEROUS, well, belly on up to the frankendairy, everyone.

“How many sippy cups have I filled with this milk?” thought Robyn. “How many bowls of cereal have I poured it on for my husband, not knowing that Canada, the UK, Australia, Japan, New Zealand and all 27 countries in Europe didn’t allow it?”

Find 18 minutes in the coming week to watch and listen to Robyn on your own. Here is her TEDxAustin speech earlier this year.

While I was alarmed about what I’ve been feeding myself and my children, I also had reservations about making changes.

But healthy eating is SO expensive!

Or, in the words of that old oil filter commercial, Pay me now or pay me later.

Later is almost always more expensive. I vote for paying more at the grocery store (or farmer’s market). The costs of working it out at the hospital go beyond the financial.

It’s just too much to take on.

Robyn said repeatedly, Don’t make the perfect the enemy of the good.

Some of you have mentioned the discipline and willpower I must have in abundance regarding my new eating habits. Really, I have neither. What I do have is mindfulness. I’m paying more attention to what nourishes me.

And Robyn’s quote above rings true. At one time, the Perfectionist Lori would never have undertaken such a dramatic set of changes because, well, taken together they are simply too dramatic.

But as any athlete will tell you (and it’s only been 3 years that I consider myself any sort of athlete, of the yoga variety) a steady force will bring change. Water droplets will carve a canyon. Poses that were impossible to me just a year ago are now in my practice. All because I finally realized that steady effort and aim is so much more effective than all-or-nothing.

So what can I do?

If you’re called to action, as I am, consider these ideas.

To see what other bloggers thought of our lunch with Robyn, check out the entries on LinkyTools, below.

43 thoughts on “The Unhealthy Truth (with giveaway)”