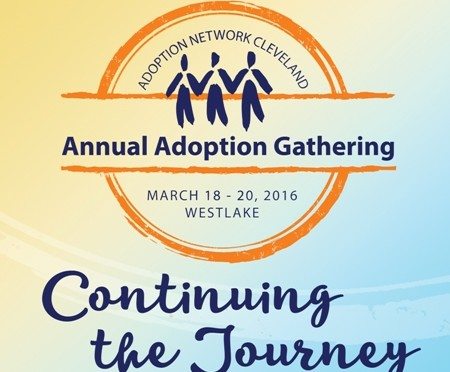 If you’re interested in adoption issues and able to be in the Cleveland area the weekend of March 18-20, you’ll want to know about the Annual Adoption Gathering hosted by Adoption Network Cleveland. Coinciding with the first anniversary of this, ANC offers this: 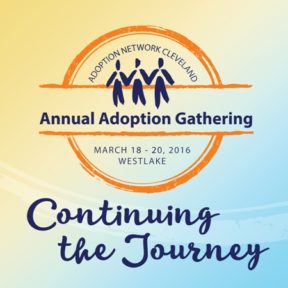 The Ohio adoption community has experienced a transformative year since Ohio’s Opening Day. Please join us Friday, March 18 through Sunday, March 20, 2016 as we continue our journey together, to celebrate, discuss, process, grieve, and commune with others.

Where: DoubleTree in Westlake (1100 Crocker Road, Westlake, OH 44145) Rooms are at the group rate of $99/night.  The hotel has a free airport shuttle for guests.

What: A conference to facilitate conversations about adoption that will be shaped and driven by its participants. After the tremendous outpouring of interest, support, and participation surrounding the implementation of Ohio adoptees’ right to access their original birth records in March of 2015, Adoption Network Cleveland recognized the enormous need to continue fostering the community that organically developed among Ohio adoptees near and far. This conference is an outcropping and continuation of the conversations that originated in the aftermath of last year’s monumental events.

There are nine breakout sessions and two award-winning theatrical presentations from New York City. Other highlights include filmmaker Jean Strauss and footage from last year’s Ohio opening day events, Six-Word Stories from adoptees and found birth family members, and a time for sharing with an open mic. 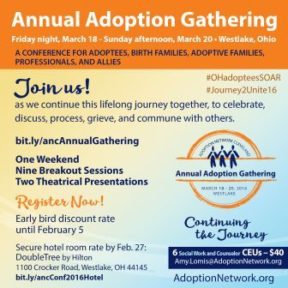 Click to register. Get an early bird rate – $100 for Adoption Network Cleveland members and $135 for non-members – by registering before February 5, 2016.