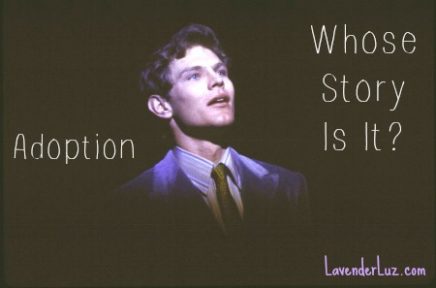 Question: I am adoptive mom of two adorable kids  and I attend a monthly support group for mothers like me in my country.

We have been discussing the importance of telling the child they are adopted. Not everyone thinks it needs to be told, since in our culture (which is fairly homogeneous) you can’t always tell someone is adopted just by looking. In fact, one of our members has a certain pride that her child that looks like a carbon copy her.  In this case, the child will never guess he’s adopted, so why tell?

I understand where that idea comes from, but I fear it will eventually harm the child. In attempting to help this mom see another way of thinking, I have quoted books, research and studies. I gave a lot of examples from my experience with my kids. But I am still looking for what could be an  AHA Moment for her.

Can you help? — Zilla in the eastern hemisphere.

The Fundamental Question About the Adoption Story

Identity and trust are big issues for adoptees, and you’re wise to help parents do well by adopted children early on, while there’s still time to re-evaluate one’s methods.

The fundamental question adoptive parents must consider is this:

Who owns the adopted person’s story?

I’ll get to that in a moment, but ask your group to consider three main reasons to share information with the adoptee early and often.

1. A sense of Otherness involves more than just appearance. Adoptive parents must realize is that identity comes from so much more than just looks. Just because we CAN pretend that someone is biologically connected to us doesn’t mean we should.

2. The issue of trust. Time and again we hear from late discovery adoptees (LDAs) that they always felt different, even if they didn’t look different. What happens when they inevitably find out is that the trust they had with their adoptive parents gets ripped from under them. If they couldn’t trust their parents to share with them such a primal piece of their life story, then maybe there was never a true relationship to begin with.

Repair from such a breach becomes enormously difficult.

3. Truth comes out anyway. Especially these days when social media connects us in ways we’d never imagined, adoptees grow up and can dig around and find their stories on their own. They may be prompted by that inner feeling of Otherness (#1 above) and then the adoptive parents will have to deal with the big — HUGE — issue of trust (#2 above).

Plus, if anyone knows (or suspects) the true story — doctor, mother-in-law, cousin, neighbor, friend, clergyman, dry cleaner — the potential exists for beans to be spilled in the messiest way imaginable.

And even if social media or blurted news don’t lead someone to their own story, advances in DNA testing make it quite possible that such revelatory information will eventually come out. And then what happens to the parents’ relationship with their now-grown child?

It may be that “no one can tell” at first glance but there may be all kinds of dissimilarities beneath the surface. — Jodi Haywood, adoptee and author

You don’t need to show your fellow adoptive moms scholarly studies or research. Just point them toward the words of grown adoptees, stand-ins for their own children in a few years. Wouldn’t they rather know NOW while they can prevent problems of identity and trust? Have your friends read the comments on this post. Or this post from an LDA.

Or better yet, turn your group into a book club for the purpose of reading the invaluable adoptee perspectives in the book Adoptee Survival Guide and Adoption Reunion in the Social Media Age. You’ll discover the fallout resulting from keeping secrets from the person they’re about.

Maybe it’s More About the Parent than the Child

Is it possible to have an open unguarded conversation about WHY some mothers want to keep adoption a secret? In other words, get to the root reason why one might prefer untruth to truth.

So Whose Story Is It?

I believe, and so do many others, that the adopted person owns her story. I as a parent am merely caretaker of it, gradually handing over the parts of it to her as she is cognitively ready to process and incorporate it.

It is NOT my story to give or not give at my discretion. Indeed, it is not mine at all.

Dear Readers, what say you? Please share links to posts and articles that explain why adoptive parents should tell about adoption, even if one believes nobody  would ever guess.