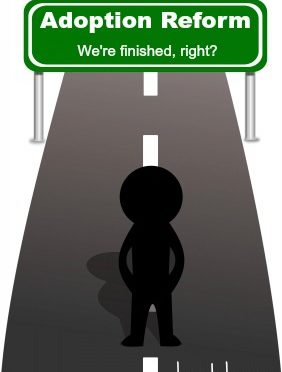 This article was originally commissioned and published by the Donaldson Adoption Institute, which closed its doors last month. No longer accessible at the Donaldson site, this article was derived from a workshop Addison Cooper (Adoption at the Movies) and I presented at the American Adoption Congress Conference in 2016.

Imagine a glorious time in the future when all adoptees can get their original birth certificates and all open adoption arrangements are codified with a contract. Won’t it be great to be finished with the hard work of adoption reform? 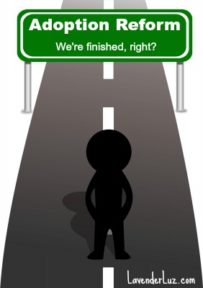 While changes in adoption laws and policy are necessary, these alone will not make Adoption World all better. If laws were the endpoints, then the passage of the 13th, 14th and 15th amendments would have resulted in immediate equality for formerly enslaved and free African Americans. But they didn’t. Now, even 150 years later, our society struggles with these same issues.

Reforming policy and law is one necessary step, but it’s not the last step. Not until ideas of respect, empathy, and inherent value of others also take root in people’s hearts can true and enduring change happen.

As an experiment, ask yourself:

Some things you do because it’s a rule, and some things you do because it seems right to you. Sometimes it’s because “somebody told me” and other times it’s because “I told myself.” What is it that makes us feel good about giving money to charity, but resentful about paying our taxes?  What is it that makes us resent a speeding ticket for going 7 miles an hour over the speed limit at the bottom of a hill, but not resent a ticket for texting while driving in a school zone?

The difference lies in whether we feel motivated by externally imposed rules or internally embraced values. We may resent taxes because we have no choice in paying them and because we don’t always see direct benefits We may not get the same sense of fulfillment from paying our taxes that we do from giving to a chosen charity. Paying taxes and donating to charities are both things we should do, but one type we do because an external force makes us do it, the other comes from within.

Law vs Spirit of the Law

It’s good to have good laws; it’s even better when those laws are followed naturally, because they’re viewed as the right thing to do anyway.

With the desired reforms in adoption, we don’t just want to see compelled behavioral change (because I have to), we want the spirit of the changes (because it’s in line with who I want to be).

To put this in adoption terms, even though adoptive parents and birth parents may have a Post-Adoption Contact Agreement, that doesn’t always mean the agreement comes from the heart. The law says one thing, but the vibe among those in the adoption constellation may say something else. The adopted child will likely sense such a disconnect when contact is made from obligation rather than a desire for connection.

And even if the law says that an adoptee can get his original birth certificate, if the vibe he senses from his family isn’t an open one, he may not actually feel as though he’s free to get his document. He intuits the mixed message from his parents:  Yes you can, but no you may not.

‘Til Death Do I Search

How many times have you heard of an adoptee waiting until the death of her adoptive parents to begin searching for her original parents? Even if she had been legally free to start looking, she never really felt free to do so. A law opening up her original birth certificate would be ineffective for her until and unless her adoptive parents had given the vibe that would have freed her to access it.

Such closedness and brittleness is sad for all involved, including adoptive parents.

Reforming Adoption at the Heart Level

Ideas start big at the macro level, but implementation needs to reach all the way to the micro level, to the minds and hearts of individuals. Fortunately, much is already being done in Adoption World to bring about such changes.

In preparing for our presentation at the 2016 American Adoption Congress Conference, Addison Cooper (Adoption at the Movies) and I began to compile a list of people already doing the work of bringing heart-based change. Take a look.

We started jotting down frameworks on our radar that move people from:

Though by no means all-inclusive, on this list you’ll find adoption reform luminaries like Jim Gritter and Dr. Joyce Maguire Pavao. You’ll see organizations like Creating a Family and the Family to Family Support Network.  You’ll see work from the #flipthescript effort, as well as a variety of voices on Portrait of an Adoption.

And because stories are such effective and wonderful ways for people to connect deeply with another person and to truly “get” a new viewpoint, Addison offers films about Angela Tucker (Closure) and by David Quint (Father Unknown). Lori shares memoirs by Anne Heffron and Lorraine Dusky, as well as anthologies compiled by Lynn Grubb and Laura Dennis.

Really, you need to check these out. Each is brilliant for reaching directly into the hearts of the audience.

Feel free to start here and add resources you know of to make this list your own.

While adoption may appear to be a legal experience, it is also at its essence, as Dr. Randolph Severson says, a spiritual experience. The head is involved, and so must the heart be.

No matter what laws are passed and no matter what agreements are signed, Adoption World will become a more hospitious place if we don’t rely solely on rules. Let us — each of us — also open and engage our hearts.

Let us offer to others what we most desire for ourselves: respect, empathy, and a recognition of inherent value.

6 thoughts on “Adoption Reform: All We Need is Laws?”