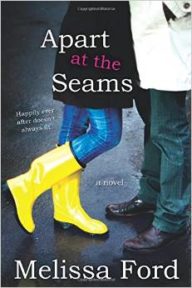 Several book lovers are sharing our thoughts about Melissa Ford’s third novel, Apart at the Seams. Even if you aren’t part of the tour and even if you haven’t read the book, check out what people are saying — you might find that this book is one you want to put on your wishlist.

NEWSFLASH: Apart at the Seams has been chosen for the Kindle Amazon Daily Deal for TOMORROW, September 5.

Via the links below, you’ll hear from book tourists as we answer questions put to each other in our virtual book club. Next we’ll hear from the author herself as Melissa Ford responds to the questions we posed to her about her characters, her sideways sequel, her writing methods, and other juicy tidbits from behind the scenes.

See the master list at the bottom of this post, following my own contribution to this book tour.

My stop on the Apart at the Seams book tour

Melissa is adept at exploring big themes for women who are trying to have it all. She lets us peek in as her characters sort out competing emotions: Self vs partner. Career vs relationship. Ambition vs presence. Excitement vs stability. Creativity vs contentment. These conundrums appear in my own life and are likely to have near-universal resonance.

As a companion novel to Life from Scratch and Measure of Love, this third book in the series takes a sideways narrative with Rachel’ best friend Arianna (you don’t need to have read the prequels for “Apart at the Seams” to work for you). This single mother and aspiring fashion designer has just taken her relationship with Rachel’s brother, Ethan, to the next level. And Arianna gets an incredible opportunity through her fashion house, one that involves hanging out with a Jon Stewart-esque cast on a late-night TV show.

But! Inevitable cracks appear in her relationship as demands are made on her and priorities shift. How can Arianna be both true to herself AND in relationship with a man who has such differing values?

Melissa examines these knotty problems from all angles. As I read, I see so much of myself in her heroines.

Three questions from the book group and my responses:

Why didn’t Arianna ever loser her temper and go off on people who were annoying her?  She’s the straightforward, no nonsense, Midwestern girl who gets things done.  As a straightforward, no nonsense, Midwestern girl, my expectation would be that someone would get a serious dressing down…especially considering her stress level.  But maybe Minnesotans are more like Canadians than other Midwesterners?

Maybe geography isn’t the main thing that goes into straightforward-no-nonsenseness.

I first had to gain clarity (a very gradual process) within myself before I could express to others my emotions and preferences. In previous stages I have experimented between the extremes of being aggressive to get what I want (my teen years, during which I was an erratic bulldozer with my parents) to being very passive about it all (early romantic relationships, hierarchical work relationships). I’ve modulated that pendulum in recent years and in most situations I can be appropriately assertive.

But it took trial and error — and time. I think time, rather than place, is what kept Arianna from being as straighforward-no-nonsense outside her head as she was inside her head.

It feels as though Arianna would become irritated with Ethan for not doing things she needed him to do yet she often wouldn’t verbalize clearly what it was she wanted or needed. Why do you think asking for exactly what you need makes you feel so vulnerable?

This goes back to having clarity within, with having healthy boundaries around what is and isn’t reasonable to expect from a person and relationship, and being able to articulate those expectations — asking for what you need. These are traits I continue to develop (there is no there there).

When not quite confident of where one person starts and another begins, and when unsure of a code of behavior, Arianna resorts to what so many women do — being the “good girl.” I have been taming my inner Good Girl for decades. She emerges when I feel out of my element. And when she does, I become a consummate people pleaser, taking care of the other’s needs while seething that my own aren’t being addressed.

I think it is very vulnerable to be authentic — to live without a mask, without a barrier between you and the world (or just the other in a relationship). To do so, you are clear within yourself, you set and patrol boundaries that are respectful to you and the other person, and you have courage to ask for what you want. It’s a very vulnerable state — and paradoxically, a sign of incredible inner strength.

Arianna has several major events that are downplayed by Rachel. How would you have reacted if this had happened to you? Would you have made the effort to repair the friendship?

My first inclination with discord is to look within. Was I the one who didn’t share enough? Am I expecting my friend to read my mind? Are my expectations too high regarding the important people in my life? Do I expect that others will supply for me something that I could very well supply for myself?

After my exercise in introspection, I  take a look at the other person. Did she know what I needed in that moment? Should she have known (and how?)?  Did she deliberately slight me? Is there other evidence that this relationships is waning?

I may decide to speak up to my friend, I might say:”Hey, when that big thing happened to me, I feel as if you weren’t really there for me. What was going on for you?” If my friend has repeatedly not been there for me and I’ve tried to address it multiple times, I may simply let the friendship die. If I myself am in a funk, I would tell myself to “snap out of it! — stop being a victim and move on.”

So yes, I would make an effort to repair a friendship by looking within, by talking it out, and by asking for what I want. But if the person is unresponsive to my overtures, I would not belabor my efforts. I would not close the door forever, but I would not continue my efforts on something that’s just not there at a point in time.

To continue to this book tour, please visit the links below. Comments are much appreciated by the book tourists!

Thanks for following along on our book tour, and be sure to come back for Saturday’s batch of posts!

18 thoughts on “The Apart at the Seams Book Tour is Here!”