Reed’s wallet had been lost for weeks. Sadly, he had a solid wad of money in it, given to him by his Grandfather in Boston, who had recently installed a toll transponder and had no further need for a 5 gallon barrel of change he’d collected. They’d gone to the bank to change the coins into bills and split it between the two grandkids, and Reed’s wallet had been bulging for a couple of weeks.

It went missing and Reed looked for it half-heartedly. It was only when he had immediate needs (like while we were in Tar.get) that he desperately wanted his wallet found. When he was actually home, amid the chaos that is his room, he couldn’t be bothered to look.

Until the weekend that Bruno Mars came to town. I told the kids I would take them to the concert if they would pay for half their tickets — about $18. You may think this is mean, but they appreciate things more when they’ve used their own energy to pay for it.

Tessa and I cleaned his entire room looking for the dratted thing. It took all freakin’ afternoon. He “helped” us by complaining less loudly than usual.

Finally I looked in one of the previously looked-in places:

Reed’s relief brought him to tears.

Best! Mom! Ever! he said as he hugged me.

Who is poised to take over the King of Pop crown now that Michael Jackson is gone? My vote goes to Bruno Mars. He’s got pop instincts as a writer of catchy songs, pop moves as a dancer, and he’s pretty darn cute. Just check out this or this or this:

(And yes, some of the lyrics did cause us to have a discussion about appropriateness.)

Having the long concert history that I do — dating all the way back to Barry Manilow (don’t hate me because I’m cool) — I know how valuable it will be for them someday to say, “I saw Bruno Mars at the very beginning of his career.” And also, how groovy is it to take your kids to their first concert?

So I took Tessa and Reed. I remembered to bring binoculars and three pairs of ear plugs. Show time was at 7:30 with one opening act. But there was an additional band on stage before the billed opener, which means that Bruno Mars didn’t hit the stage until 9:40 pm. Sure, there was some impatient squirming, but it was all worth it when Bruno finally came out. 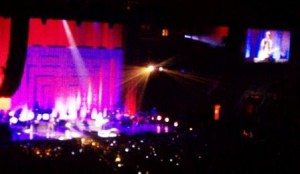 (Apologies for the quality. There was a lot of jumping up and down going on.)

We rocked and rolled and yelled and danced and had a blast together. The show lasted until 11:30 pm and the kids were troopers. They were even able to make the trek back to the parking lot. I had moments of panic toward the end when I thought I might have to carry two sleeping children a quarter-mile to the car (by the way, Roger was out of town at this time).

It was a memory in the making. Tessa and Reed exclaimed, through their sleepiness, that it was the “best night of my entire life!” And for a time I was the…

Some of the best things about writing for MileHighMamas, besides getting to know all the other Mamas, are the perks that our editor is sometimes able to share with us. This time it was entry for our families to Water World, the largest water park in the US — 67 acres. We were there all day and only able to visit a fraction of the attractions.

Not only did we get in with complimentary passes, but Water World also provided us lunch and valet service for the enormous inflatable rafts that the common people had to lug up the hills. Our very special kids? Walked to the top of the rides, cut in line by virtue of their special wristbands, and were awarded a raft out of the stash already at the top.

Tessa and Reed especially loved hanging out on the “beach” at Thunder Bay. The sandless beach with the soda pop logo.

Except for my periodic calling in for sunscreen slathering, once again I was the Best! Mom! Ever!

With my frequent insistence on tooth-brushing an clothes-folding and TV-limiting and general No-ing, hey, I’ll take Best! Mom! Ever! every time I can get it.