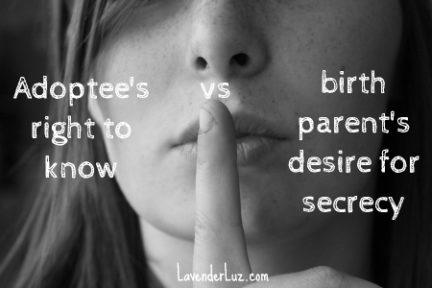 Question: We brought our son home through domestic private adoption 14 months ago (he spent a month in agency foster care because of some time in NICU and a bunch of red tape delays).

We have openness with Ben’s birth mother, Tina — at least we did. I send pictures through an app so she can see them when and if she wants. She doesn’t directly inquire about him, though she’ll ask how we’re all doing. Months ago after a long period of not getting any response from  her, I looked on her social media, which was public, and discovered she was expecting a baby.

She’s never told me. We’ve texted a few times since, but she’s said nothing about being pregnant. Last week I discovered she’d just had her daughter. I have filed away the baby’s name in case my son wants to search for her some day. No one in Tina’s family knows about our son. (I have their names and some information as she was very forthright with it. Detectives tried but couldn’t find the birth father.)

From social media, it’s clear that her family is ecstatic about this current baby. I don’t believe Tina has any intention of telling us about her daughter, as then it would open the possibility of my son being discovered.

What should I do now and in the future? I am afraid of making a misstep that ruins any possible relationship between us and our son’s birth mom. There is a very real possibility of her closing the adoption, which saddens me. Do I admit I know about the new baby, or continue as if I don’t know? I prefer honestly but it would also require I admit that I have seen this information online. I worry this would make her feel violated.

At what point do I tell my son that he has a bio sister? I would love more contact for my son’s sake, but I don’t want to ruin things in my desire for it.

An Adoptee on Truth

Hi, Kirsten. It’s tricky to balance two competing sides: the right of an adoptee to know their whole story, and the desire of a birth parent to keep information secret.

I posed your situation to a Facebook community that includes adoptees, first parents, and adoptive parents. Two adoptees responded. (And if you, dear Reader, happen to be a birth parent, please consider leaving your thoughts in a comment.)

She continues with advice to always tell your son the truth. While it might seem easier to conceal the truth, you will loose trust and credibility if you do that. The truth always has a way of coming out.

Regarding your son’s birth mom, Tracy says, I’m guessing that her emotions are a maelstrom after the birth of her daughter and it has brought up emotions from her first child’s birth that she kept secret. Because of that she doesn’t have the support system in place to talk about her feelings related to the relinquishment. Denial might be her coping mechanism right now, or it might just be too fresh and painful right now. Let’s hope that as time passes, she reaches out for contact. But in the mean time, keep the updates going, keep sending the photos so it’s all waiting for her when she does want to make contact again.

An Adoptee on Secrecy

Jodi Haywood, marathon runner and contributor to the #flipthescript series, acknowledges the predicament you’re in. Secrecy puts everyone in such a difficult position. Honesty is always the best policy. If bio mom doesn’t want to be honest, and Kirsten doesn’t want to lie to the boy, it’s going to be tough. He has a right to know about his sister, but what do you say when he asks why his sister was kept and he wasn’t? I don’t think there are any easy answers for that.

Like Tracy, Jodi emphasizes the importance of delivering truth to your son. Give your son pieces of his story as he’s old enough to process them, assuming he’s not going to have any face to face contact anytime soon. It’s never too soon to tell him he’s adopted, so when the time does come for the more complicated conversations, he trusts you and knows you’ll be honest with him.  Meanwhile, let the bio mom know that you won’t lie to your son about anything, under any circumstances, to protect anyone, because his trust in you as his caregiver is more valuable than that.

Jodi points out that your son’s birth mom has other problems to deal with, aside from the son you share. Bio mom needs to understand that placing her son is going to affect the future relationships between her children, even if they don’t meet until they’re adults. Children can understand a lot if it’s explained to them in age appropriate terms. His sister may fear she’ll be given away too, if she finds out an older sibling was. It’s best to prepare answers for these questions now, so that when the time comes, no one is at a loss for words and makes excuses for “not wanting to talk about it”.

My 2 Cents: What to Tell the Birth Mom

I suggest you share with Tina that you are aware she has a daughter and that you wish them all well and that you don’t intend to out your son to her family. Do it in a non-threatening way. Hey, I heard congratulations are in order. I am so happy for you. I will follow your lead about sharing Ben’s existence — or not.

It would be great if Tina asks how you heard the news because then you could let her know her current social media settings revealed it. In a way, you are doing her a favor. For if privacy is so important to her, she has some holes to plug.

I wonder if you feel a little guilty about “stalking” her. But really, have you done anything to feel guilty about? So many people these days check out others on social media, and a check-out is not a stalk. Plus, you have no nefarious intent. If you can resolve your own feelings of guilt around knowing about Tina’s daughter, you’ll have an easier time approaching the subject with her matter-of-factly.

Tina is going to have a hard time grieving the loss of her son if she can’t do it with the support of those around her. I’m guessing, like Tracy surmised, this is something that keeps her from being able to stay in contact with you.

You may not be able to do anything to help Tina around this issue, but I do want to underscore the importance of acknowledging and processing grief in adoption, whether it exists for the adoptee, the birth parent, or the adoptive parent.

Why is Tina not able to share the existence of her son with her family and close friends? We cannot know for sure, but others who have placed tell of the terrible shame that can come from an unplanned pregnancy and from placing a child for adoption. Shame leads to secrecy, which is different from privacy.

How are the two different? Secrecy is wrapped in a suffocating blanket of shame. That blanket is is toxic; it prevents grieving and healing by halting the movement of very big emotions.

On Telling Your Son

I’m thinking you don’t need to bring up his sister right away, but instead wait a reasonable time (a couple of years, say, by which time much could change with Tina) for your son to ask about siblings. When he does, tell him you’ll see what you can find out (this small delay is to buy yourself a day or so to figure out the conversation).

Then tell him. As Tracy and Jodi say, the adoptee’s right to know their whole story trumps anyone else’s need for secrecy that stems from shame.

Finally, understand that a lot can change over time. What you and Tina are experiencing now will not stay static. You may find that as her daughter grows, Tina’s stance on secrecy may change, as could her ability to compartmentalize the experience of placing her son. You don’t have to figure out forever right now; just the near future.