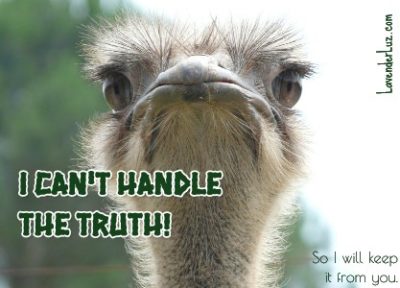 Question: Adoption in my country is closed because children are usually found at the hospital or mosque.  But some were put in the orphanage because their parents either divorced or there’s some reason that  the parents can not or will not take care of their children. In the old days these kids stayed in the orphanage. But in recent years we’ve begun placing them through adoption.

So because there’s no contact, too often there is also no openness.

I know from listening to adoptees that when these children grow older, they will want to know what happened. They may want to know their parents or at least information about their parents. I hear adoptees say that not knowing their truth causes grief and tears.

But some moms in the adoption support group I started have a psychological block. As I’ve written before, some refuse to acknowledge the kid was adopted (this is possible to do here because the children look Arab, just like their adoptive parents). The dissonance in these mothers is so great that some stop coming to our adoption support group meetings. They are the ones who need our support most.

How can I win back an adoptive mother like this before her child is grown? I am sure then she will be the one crying.

WHY Adoptive Parents Must Face the Truth

As you already know, Zilla, an adoptive mother needs to address her own insecurities and grief — in short, to address her own fragility — in order to help her child gather all their parts and integrate their identity. Not to do so is tragic for all, because the relationship between parent and child cannot be enduringly strong if it’s based on lies,  either those of omission or commission.

A fundamental layer of relationship is trust, trust that parents will deliver the child’s truth, the whole truth, and nothing but the truth over time. To do any less will almost certainly come back to bite parents in a tender part.

Sticking one’s fingers in the ears or sticking one’s head in the sand like an ostrich doesn’t actually make the problem go away (the problem in this case being the mother’s unexpressed feelings about adoption and perhaps the factors that led her to adoption). It just makes the problem remain unacknowledged and undealt with. Then the problem can fester or become even bigger over time.

It’s like wondering if a spot on your skin is dangerous. Deal with it early and it’s treatable. Hide your head in the sand and in a few years you are facing something devastating and maybe even terminal (to the relationship).

It’s in an adoptive mother’s own best interest to just face the truth.  Though scary, it’s so much easier and better to deal with than to continue not to. But how?

HOW Adoptive Parents Can Face the Truth

1. See from the child’s perspective. Imagine what would it feel like to be raised by people with whom you have no genetic connection. Would you know deep down that you’re different from the parents who are raising you? Would you want your parents to be alongside you as figure out your story and your life, or would you feel as though you need to keep your thoughts secret so as not to trigger them?

Empathy is important in all relationships, but especially in a parent/child relationship.

2. Tune into yourself. Detect and resolve any triggers you may have about your family-building story. Your child will have a spidey-sense whenever they get too close to one of your hot buttons.

Tuning in might look like prayer or meditation or a moment of quiet at the beginning or end of each day — any way that works for you to get into an inner space. It’s the practice when you’re not stressed that will help you in moments when you are.

3. Attend to your own sore spots that arise from grief, insecurity, jealousy, or other emotions we don’t like to feel. Acknowledging that they’re there is half the task of releasing their power over you.

The goal isn’t to never feel these “icky” emotions — you’re going to feel them from time to time because you’re human. The goal is simply to know when you’re feeling them, to attune to what’s going on within yourself.

Then you are able to intentionally orient on the child and on their truth. When you’ve done your own work, it’s not so painful to face the truth, for you have disarmed the triggers within you.

To Parents in a Prison of Their Own Making

My message to Zilla’s support group members who have exiled themselves to a prison of sorts: see beyond your own fears and insecurities for the sake of you and your child. Once you decide to face the truth, you will find the path so much easier than hiding your head in the sand and living a brittle existence.

Rejoin Zilla’s group ASAP to begin to strengthen the places you feel fragile and become capable rather than brittle.

4 thoughts on “Why & How Adoptive Parents Must Face the Truth”