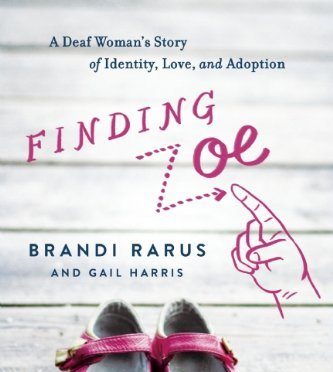 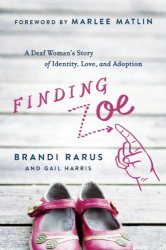 But what about supporting the birth father when he indicates an interest in parenting? Why didn’t we hear from the social worker involved? What about a sense of destiny — a meant-to-be-ness — in an adoption scenario?

These are just a few of the questions posed by virtual book club readers who are sharing thoughts today about Brandi Rarus’ brand new memoir.  Finding Zoe combines Deaf Culture and the adoption of her daughter, Zoe, who lived in four homes in her first eight months of life.  Even if you aren’t part of the tour and even if you haven’t read the book, check out what readers are saying — you might find that Finding Zoe is one you want to put on your gift list or wishlist.

Via the links below, you’ll get to be a fly on the wall as readers answer questions put to each other in our virtual book club. In a day or two we’ll hear from the author herself as Brandi Rarus responds to questions we posed to her about sharing her daughter’s story, the status of openness between Zoe’s birth parents 10 years in, and the role of the social worker in her story.

See the master list at the bottom of this post, following my own contribution to this book tour.

My stop on the Finding Zoe book tour

I enjoyed reading about how Brandi, who became deaf at age 6 due to spinal meningitis, moved between two worlds as a child and as a young adult. Early on, she was a deaf person in a hearing world. She’d already developed speaking skills prior to losing her hearing, and proved adept at lip reading and at being understood with speech. She accepted her new reality and continued to function well despite losing her sense of hearing.

As she grew up, she moved into another world, the one of Deaf Culture.  She’d found her peeps, those who shared her experience of being deaf. Yet she found that there was quite a split between the two worlds. Some could be militant about how deaf people should relate to the world: (a) the deaf should do their best to fit in with hearing people by lip-reading and learning so speak (oralists), OR (b) the deaf must learn sign language to communicate with other sign language speakers (manualists).

The book gives a history of the large chasm between the likes of Alexander Graham Bell, who advocated for oralism, and the likes of Thomas Hopkins Gallaudet, who was a proponent of  manualism.

Brandi took these Either/Or worlds and became a bridge, a Both/And, between oralism and manualism.

Later, she married deaf activist Tim Rarus and they had three hearing sons. But Brandi had felt all her life that she would one day have a daughter. The realness of this would-be daughter was almost palpable to Brandi. As decades passed, that dream of a daughter looked more and more unlikely to come true.

But we know Brandi eventually does become mom to a daughter, and Zoe does get a permanent home. The second half of the memoir tells of the meandering paths Brandi’s and Zoe’s lives took separately to eventually intersect and inertwine. Viewpoints of both birth parents are included.

Two questions from the book group and my responses:

Was anyone else curious why the birth father, BJ, wasn’t given more support when he clearly wanted to parent his daughter? It seemed like the Christian agency and the agency representative Marlys had an agenda and the biological father and his parents were not part of their plan.

The book states that “BJ believed that his child belonged with him,” and from the telling it does seem that the agency was more intent on the outcome than on the integrity of the process of this adoption (perhaps that’s because the agency was advocating for and abiding by the wishes of the placing mom, its client, but who knows).

BJ, who had been involved during the pregnancy, wasn’t told that his his baby had been born. Social worker Marlys later said when breaking the news to the first adopting parents that BJ was interested in parenting: “His response is fairly typical, but they [birth fathers] usually come around” — meaning that BJ would probably end up relinquishing.

BJ, already nervous about parenting a child solo, was dealt a final blow with the news that his baby probably had special needs. The social worker came to his house and told him that “he couldn’t possibly earn enough money to provide for Celine [later Zoe] because there wasn’t enough money to be made in landscaping.” BJ did have the support of his parents for whatever he decided.

So yes, I do think that the agency, through the social worker, acted with perceived omniscience, as if she knew what was best for all involved.

Really, though, who among us has an omniscient point of view? Even the people who live with the consequences of a decision (unlike the social worker, who will walk away from it) have a hard time grappling with possible and desired outcomes.

What are your thoughts on “meant to be” in adoption – a sense of destiny? Do you think it makes a difference how this feels in different parts of the triad? Explain.

Many adoption bloggers addressed this topic two years ago when the New York Times published an article called “Adoption, Destiny and Magical Thinking.” I made the point that that there’s a flip side to saying a child is meant for you, and that flip side is that the child was meant to lose his/her original parents. I closed with this:

And yet, I can see how Brandi would come to the conclusion that she and her husband were highly qualified to parent Zoe. Brandi says about the time infant Zoe was in limbo,

…a deaf infant could be severely slowed down in acquiring language unless early and effective measures are taken — unless she is given sign language… [She needs] parents who know how to address her and who use dialogue and language that advance her mind.

…it is language, rather than what kind of language, that nurtures not only linguistic competence but also intellectual competence.

I bet anyone reading here would go to great lengths to avoid the withholding of language to a hearing child. I can understand how Brandi would want to make sure that the window of language acquisition for baby Zoe didn’t begin to close before help arrived in the form that would best serve Zoe.

As for the question about destiny and different parts of the triad, as I said  about the NYT article:

Those on the Win side of an adoption are more likely to recognized destiny’s hand than those who feel they were on the Loss side.

What do you think about adoption and destiny?

To continue to the next leg of this book tour, please visit the links below. Comments are much appreciated by the book tourists!

Thanks for following along on our book tour, and be sure to come back later this week for Brandi’s responses to our questions.