Which makes me think of my own summer vacations several decades ago. My sisters and I would sleep in til 7:30 (only 10 minutes later than we grudgingly awoke on school days), eager to suck the marrow out of all the daylight. We’d get dressed and chomp down some Count Chocula, sailing out the screen door with our pigtails flying behind us.

We’d start playing with these, making as much merriment noise as we could to get the other neighborhood kids to come out and join us. Soon Gaylee and Pam, Tyler and Greg and assorted other grade-schoolers poured out of their houses and into the street. We’d play kickball and kick the can and explore the woods on the edges of our neighborhood. More days than not we’d do our absolute favorite activity, building forts.

We’d head into someone’s backyard, usually ours because it was the flattest, and put all the webbed lawn furniture on its side. We’d grab towels and blankets from our moms and begin constructing our “homes.” Always the youngest girl would have to be the Clothespin Lady — often my sister Sheri until our sister Tami was old enough to take her place.

The Clothespin Lady’s job was to deliver one clothespin into the hands of whichever builder had called for her, and with the same precision that a surgeon expects of his instrument assistant. She was not permitted to arrange chairs or place blankets or even make suggestions. Her sole purpose was to serve up wooden clips to the master builders. When a new family with a younger child moved into the neighborhood, the Clothespin Lady was especially excited to be able to relinquish her position to the new kid.

Our forts were patchwork-y on the outside and cozy on the inside. We’d play house, the older kids as the moms and dads and the younger kids as the sons and daughters.

We built and played Forts for hours on end. Late afternoon we’d take a break and go inside to watch Zoom and have supper. We’d snarf it down and beg to be excused to re-congregate in the street for one last kickball game and to tear down the fort before the streetlights came on.

The other day I made a pit stop at WalM*rt. Now that I was grown up and understood concepts like weight and density and had more experience with drape-age, I knew that I’d be able to build a spectacular fort if I used lightweight sheets instead of the heavy blankets and towels of my childhood. And I’d thereby impress Tessa and Reed with my master building skills. They’d not yet discovered fort building and I would be the Awesome Mom who taught them how to build the best. fort. ever.

So I picked up a bag of clothespins and a king sized flat sheet. With those purchases, the children somehow guessed what we would be doing, even though they’ve never seen a clothespin in their lives (do you have any in your house?). When we got home we found a flat and shady place and configured our plastic chairs in something of  a circle. We floated the sheet over as a roof and covered the sides as necessary with old towels and blankets. 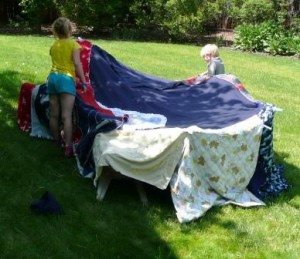 Reed later had the bright idea to poke a long stick in the ground in the center to tent the sheet and give us some more head room (he wanted me to tell you that). Tessa laid down a comforter to blanket the floor, along with some pillows. We brought in a few books and read together for a bit. 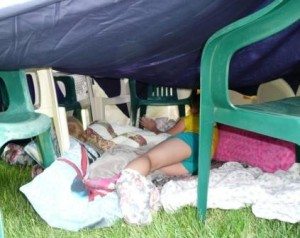 Then a spider ruined it all, having the nerve to crawl on top of the blanket rather than stay under the radar, heading straight toward the girl-child. Shrieks and a startled jump from one unnamed child tore down the fort in an instant, chairs splayed in a wide radius. The quippy child said to the freaked out one: “That spider’s the only thing that’s been attracted to you all year!”

We have not reconstructed the fort since that first day. Chair-henge remains on the lawn as evidence of our one-time project. To my dismay the kids have not, so far, proven as enchanted as my sisters and I were with fort building. It’s much less alluring than Wii and the rec center swimming pool and playdates with kids outside the neighborhood and watching DVDs while mom tries to work.

My sisters and I had access to none of those things — we solved our boredom only by being imaginative.

I didn’t start writing this post thinking it would be wistful, but as I compare my memories of childhood with their experiences today, I am sad for my children. Fort building, such a simple thing, brought us so much joy and fulfillment. Swimming and Wii and on-demand cinema seem to suck the spontaneity out of a summer.

To be fair, as I write both children are out with neighbor kids playing swords and house, so their imaginations are engaged in their own ways. And also to be fair, my recollections of my childhood summers could be drastically different from my mother’s accounts. It’s quite possible that to her, summers were full of us whining and bickering and her giving orders to “go outside and play already!”

Whatever the reality, in my memory building forts was one of the sweetest parts of summer.

What are your summer memories? What do you want summers to look like for your child(ren)?