What can be done to help internationally adopted kids?

This is the question Laura Dennis posed to me recently.

While I can talk all day long about theories of openness (and remember that openness doesn’t necessarily mean contact ), I brought in Judy Miller for wise counsel about the practicalities of applying those theories in families created through international adoption. Laura published Part 1 of our roundtable on Thursday, and Judy offered Part 2 yesterday. I present to you the conclusion of our series. 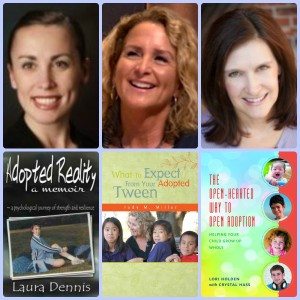 Laura: I understand child safety issues, and when contact is not an option or cost prohibitive. But what about Skype? Or staying in contact with the child’s orphanage or foster parents — so she can see where she lived before being adopted? To have some connection to her past culture, see what her homeland looks like?

Parents might balk that it’s too painful a reminder of a difficult past. What are your thoughts?

Lori: I can’t speak to this directly, but I do hear adult adoptees say that they don’t want or need to be protected from their truth, from their whole story.

In fact, I hear from many that it’s the gaps in the story that are the source of trouble, not the knowing of certain parts, even painful parts. It goes back to the issue of integrating one’s identity. My book’s premise is that adoption creates a split between a person’s biology and his biology, and openness is an effective way to heal that split. I suppose you could also say that filling in all the gaps in a person’s story, so that he knows the truth of what happened on Day 1, on Day 28, on Day 57, on Day 263, on each and every day until the time he found himself in your arms, goes a long way in helping a son integrate all the parts of himself – biology, biography, and the story in between.

Judy: It’s the child’s story. Parents don’t have the right to make things up (lie), sugarcoat the difficult truths (encourage fantasy) or omit them. Honesty is best. Personally, prior to adopting my oldest daughter I was concerned about talking to her about the one child policy and infant/child abandonment in China. However my husband and I began to tackle it very early on and honestly, without judgment. Before initiating these talks, I was nervous, filled with sadness and judgment. I realized I risked filtering her story through my (Western) lens, and I had no right to do so or to color hers. We presented the facts. My daughter is very matter of fact about her story, and frames it within the wealth of known Chinese historical and cultural facts.

Openness in international adoption, and searches and reunions, is occurring, even in countries that were so closed/secretive, like China. Parents should be prepared and ready to support their child if he/she decides to search for or seek reunion with birth family members, and they should inform their child of this support.

Raising savvy children in a social media era underscores how important openness (and safety) is. Many adopted children and adults are finding birth family members on social media. Parents, do you have a safety plan in place?

It’s important for internationally adopted children to have connections to their culture of origin—past, present and future. Some children are more interested than others (true among my kiddos), and some don’t become interested until they are older.

Parents should try to to honor the wishes of the child—if travel is feasible and safe, tossing out occasional pebbles to the child who doesn’t want to visit, yet. Visiting and experiencing their birth country, culture of origin, and known places the child was, i.e. welfare institute, can help a lot of the missing pieces drop into the puzzle. I can tell my girls what Guangzhou smelled and sounded like in the wee dark hours of the morning as shopkeepers opened their businesses and I can share with my son how astounding it was to look out over the lush jungle canopy from La Danta at El Mirador in Tikal, but to take it in with their senses? Priceless and healing.

Infusing the Spirit of Openness

Laura: Can you talk a little about ways in which a spirit of open adoption could be applied to international adoption?

Lori: It’s important to understand that contact is not the same as openness . The adoption grid adds a dimension to what we’ve always thought of as a spectrum. While we may not have much control over the amount and type of contact in our adoption relationships, we have total control over how open-heartedly we parent.

Parenting with the spirit of openness comes down to one of the original posts Laura and I exchanged called Half-Breed, which was about embracing a Both/And heartset rather than an Either/Or mindset. Especially with international adoption, parents can affect whether or not the child will end up with two halves of himself, each independently developed (the North American half and the genetic heritage half) — or an unfractured wholeness about himself (“Yes, I am Korean, and I have been exposed to what it means to be Korean, to look Korean, maybe to speak Korean, and yes, I am American and I know all that, too). It’s a very subtle difference, and maybe Judy can address this, as well.

So what’s called for from adoptive parents is a spirit of openness. Not just to their child’s birth family, birth culture and heritage, but even more so to the child herself. Being open to her wonderings, open to giving space for the emotions she’ll move through — even grief for her losses. What’s called for is a spirit of openness to the process of raising a child via adoption. There will be bumps in the road – that’s life. Rather than steeling ourselves against these bumps, however, we see if we can open ourselves to the insights, lessons, joys, heartaches, the divine experiences that we’ll encounter along our life’s path. In this sense, parenting in international adoption is no different than parenting in any other kind of adoption.

Judy: Children who are adopted have dual identities, in our family’s case, Chinese and American, and Guatemalan and American. To acknowledge and embrace both identities of the adopted child —birth and adopted — honors the whole child.

It’s important that parents foster exploration and acceptance of both identities and help their children along the occasional bumpy process of integrating both into one identity (more of the 1+1=1). Lori said it so well, but I do want to add that without being open parents can’t help their children be all they can be. No one grows, and no one is fulfilled.

Parents, it’s not about you; it’s all about your children. How are you going to help your children straddle that chasm of ambiguity?

What are your thoughts on parenting with openness in an international adoption?

Laura Dennis was born and adopted in New Jersey and raised in Maryland, but she learned how to be a (sane) person in California, where she lost her mind and found it again in 2001. She is a former professional modern dancer and medical device sales director. Laura currently lives in Belgrade, Serbia with her young family. She is the author of Adopted Reality, a Memoir and blogs at Expat (Adoptee) Mommy. Connect with Laura on Facebook and @LauraDennisCA.

Judy M. Miller, MA, CGE is the author of the internationally selling What To Expect From Your Adopted Tween and creator and teacher of Tweens, Teens & Beyond. When not parenting her crew of four, she provides education for and support to parents and families created or grown throughout and outside of the U.S. Judy is a member of the North American Council on Adoptable Children (NACAC), the American Adoption Congress (AAC), and the National Association of Professional Women, who elected her as one of their 2012 Women of the Year. You can follow her @MamaMiller.