I’m not sure how cover creation works for other publishers or for self-publishers, but I can share with you my process.

At the beginning of our partnership, my publisher asked me to fill out a questionnaire about the cover and turn it in with the completed manuscript. Were there images that would be appropriate? I suggested anything that symbolizes union: the Tao symbol (my Twitter avatar), joined hands, joined hearts, puzzle pieces coming together, and rainbow colors for promises kept. I didn’t know how the publisher would build a cover with that input.

[I really like the image on Jim Gritter’s book, Hospitious Adoption, as well as the content in it (wow! currently selling on Amazon for $900!). But Jim got it first.

Still, for my own book I had nothing definitive in my mind, no clear vision of what the book should look like. I am much more facile thinking in words than in pictures, so I’m glad I had access to the publisher’s expertise in this part of book production.

The questionnaire also asked if there were any images that should be avoided.  I nixed babies. This book isn’t about parenting just babies. And I don’t want it to attract only people who are at the very beginning of their adoption journey. It really should have wider appeal — it’s also for parents of toddlers, gradeschoolers, tweens and teens. It’s got messages for birth families as well as adoptive families. And there’s a chapter for why and how to have openness in foster situations,  international adoptions and parenting by donor gametes — even in cases in which “openness” doesn’t mean actual contact.

I sent the questionnaire along with the manuscript at the end of the summer. And waited for the publisher to work its magic.

Two weeks ago the publisher sent me five options. Four of them had templates based on squares and were very grid-ish. But one was more orb-ish in flavor. In my mind, circles portray wholeness and integration better than do squares. So my gut feeling on choosing The One was clear and instantaneous.

And so — we now have a cover for the book. 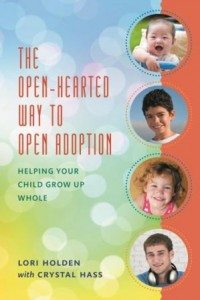 If you like it, tell me. If you don’t, there’s nothing I can do — so instead tell me who is your favorite political theorist of the European Age of Enlightenment and why.

* generic term for all Internet searches.