I’ve told the story before of how my grandfather, who died 3 months before my daughter  was born, may have sent Tessa to us. But I’ve never told the story of the possible cosmic doings behind Reed’s joining us.

Because I lost the words. Literally.

While we were in the Adoption Wait in 2002, I was attending energy work classes with my mentor, Ethel. One day Ethel brought sets of  japa mala beads that she’d made, more than enough for each person in our class. I chose this pink quartz  and burgundy glass set. 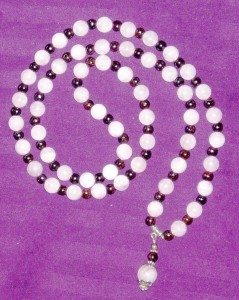 Ethel gave me a Sanskrit chant to say daily with my beads, one that would draw to me a soul who would teach me.

She said it was a good idea to say the chant to music. So I took the tune of a children’s song I had learned years previously in Japan and inserted the Sanskrit syllables.

I fingered my japa mala necklace faithfully, fondling each bead as I chanted the given sentence, eyes closed. Daiy I went around the circle twice for 108 repetitions. I knew when I was finished when I arrived at the bigger guru bead.

As you can probably guess, seven-and-a-half months after I began Om-ing, Reed was born about five-and-a-half weeks early and subsequently came into our family. There’s some intriguing math in there.

When I began blogging, I wanted to share the mystery words with other infertiles who wanted to invite a soul into their lives. Being the documentarian that I am, I knew I’d be able to easily find the mantra.

But I couldn’t. I scoured my daily journals. I re-read my notes from class. I perused my dream journals and every scrap of paper I may have written the prayer on. I tried to dig up the words from my own memory. I even asked Ethel, and she had no idea where they had come from. The words were lost to me. I finally gave up looking.

One day while sitting under the dryer at Crystal’s hair salon, I thumbed through a Yoga Journal. I opened to a page that featured an article ABOUT MY CHANT.

I scribbled down the words giddily. And now I can give them to you.

So if you are seeking a soul to teach you and are willing to open yourself up, get some prayer beads and find or make a tune that fits these words:

More on this mantra here and here (meaning varies from what Ethel told me). You can also find videos on this chant on YouTube.

17 thoughts on “Om lost and found”