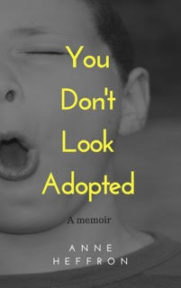 Anne Heffron is a highly gifted writer. In fact, she’s spent decades teaching writing to others, amid her own struggles around identity, brokenness, self-destructive habits, and conflicting emotions about her own mother (it’s mere coincidence that my last post was on the Happy/Sad of adoption). Her memoir and first book, You Don’t Look Adopted, was published four months ago (though Anne is already an accomplished screenwriter), and I have just recently begun reading it.

Writing her memoir — finally — about the things most pressing but most difficult to talk about is but one of the therapies Anne has pursued in her quest for wholeness and self-worth.

Problems? We Have No Problems.

A contemporary of mine, Anne shines light on the natural consequences that come from growing up in the closed adoption era, in which everyone involved in adoption was to treat it as a one-time event, as something that would never arise again. 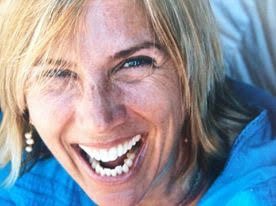 But, as Anne shows us, mothers can still be haunted by unaddressed shame and stymied by parenting children she didn’t expect; fathers can be clueless about the importance of teeny scraps of one’s early history; birth mothers, due to mortifying shame, can concoct elaborate stories about not really being the one who was pregnant; and someone at the vortex of all that can spend FIFTY YEARS sorting through layers and layers of stuff that wasn’t even supposed to exist.

I’m loving Anne’s memoir, as I love anything well-crafted that takes me out of a concrete world of black and white and into slippery shades of ambiguity. I recommend that you read her book, too, for her ability to take the non-adopted into the adoptee experience, to help readers understand adoptee feelings in metaphor and in visceral terms.

I Become a Ghost

In a powerful passage, Anne says,

Language makes talking about adoption difficult. But I am going to try because I want people to understand what it is like to be adopted, and to, ideally, never again say to people like me, “Oh, you’re adopted? So your parents aren’t your real parents?”

I have dozens more passages marked in my book, and I haven’t even quite finished yet. It’s been apparent since page 1∗ that You Don’t Look Adopted has a place on every family’s adoption book shelf — and is  a compelling read, too, for those not focused on adoption.

Caveat: If you are an adoptive mother or birth mother in a tender place about adoption, portions of Anne’s book may be difficult to read.

Then again, Going There may be part of your own healing.

∗ A quote I highlighted from the opening page: “When you are in conflict with yourself it’s like you’re a car whose gas pedal is also the brake. It’s hard to get anywhere.”