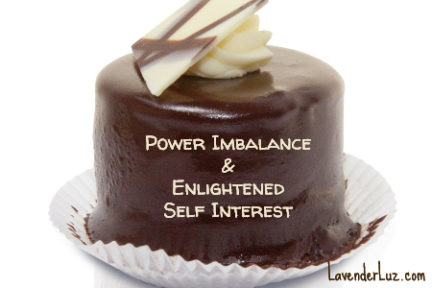 Gosh, is it scary to talk about anything race related. But I’m going to zoom out and talk first about things that are power imbalance related, using adoption, political theory, and the enlightened self-interest of sharing cake.

Jim Gritter, a pioneering social worker for open adoption, suggests in Hospitious Adoption (if you can’t find it to buy, try your library) that people in adoption relationships should take cues from the hospitality industry. Think about what makes a good guest. Think about what makes a good host. And then when you find yourself in one of those roles, take on the mindset of a good guest or a good host. (I submit this means to be able to imagine yourself in the place of the other and to then follow the Golden Rule.)

Which role will you play in your adoption relationships? If you’re an expectant mom, you are, literally, the host of your baby. You (and your baby’s father) are also the host of anyone else you invite to be at the open adoption table. The hopeful adoptive parents are guests at your invitation.

And once invited, here’s where hopeful adoptive parents ask themselves, what makes for a good guest?

Adopting parents begin as guests at the invitation of the expectant parent(s). But once the baby is placed, there is a profound power shift in which the adoptive parents become the hosts and the child’s birth parents are now their guests.

This new power dynamic will be somewhat static for about a decade, and then there will be a slow and gradual shift.

Ultimately, the host of all these relationships will be the adopted person. The question for parents to keep in mind, then, is this: What will your son/daughter have learned from you about good hosting?

That old Harry Chapin song  was a sort of warning about one day, when it’s too late to change course, you find out “he’s grown up just like me. My boy was just like me.”

I learned about Robert Nozick’s political theory while in grad school. And I use it today when I teach students about how they might create their most desirable society.

Wikipedia says: “For Nozick, a distribution of goods is just if brought about by free exchange among consenting adults from a just starting position, even if large inequalities subsequently emerge from the process.”

Now envision that your ideal society is breathed into existence, but you yourself are going to be randomized. In other words, you may be wealthy or of little means or somewhere in between.  You might be a brilliant light in the world of industry, art, music, entertainment, sports, or you might be mediocre or even lackluster in your abilities. You could end up a member of any race, of any ethnic group, of any class. You could be able-bodied, or you could face one or more physical or intellectual disabilities or health issues. You might be high-functioning and resilient and capable, and you could also deal with any of a variety of mental health issues. You could be born into an intact and close loving family, or you might be raised by someone who struggles with caring and providing and who has their own significant challenges.

Assuming you get a different life than — maybe even the opposite of — the one you want or the one you are familiar with, now how might you tweak your ideal society in terms of economic, justice, and political systems?

Self-Interest of the Enlightened Kind

And this is where enlightened self-interest comes in. When you realize that your fortune may one day be tied in with another’s, your perspective shifts and widens.

I understood Robert Nozick’s concept in a flash, for my parents had used it with my sisters and me. It’s so simple and intuitive.

If there was part of a cake left and we all wanted it, our parents solved the problem the way many of yours did. The person who cuts the cake is the last to choose their own piece. Assuming everyone wants the biggest piece possible, it’s in the slicer’s best interest to make sure none of the pieces are too small.

In other words, there is reason to seek equality, even for the person holding the power at that moment.

Last month, journalist Harry Smith offered a segment on NBC Nightly News about how Anglo Americans* will be in the minority in just a couple of decades.

This makes me refer back to Hospitious Adoption. Majority groups might want to ask themselves if they† are demonstrating the  aspects of holding power and influence that will also serve them when what goes around comes around.

Summoning the vibes of both Jim Gritter and Harry Chapin, when you end up on the short side of a power shift, what do you hope those coming in to power remember from your own behaviors?

I’ve been told I sometimes sound all Rodney King-ish on this blog, but it’s not because I’m all soft heart. (I’m so not). It’s also cold, hard, calculated self-interest. Not only is is morally right to practice kindness and the ability to put yourself in another’s place, it is also smart.

What are your thoughts on the coming demographic changes? Are we creating the world we’d want to live in no matter what station we might eventually occupy?