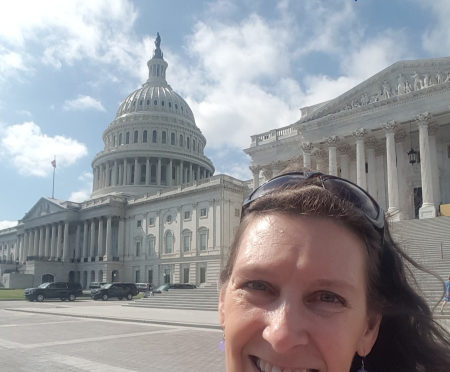 What a week to be in Washington, DC! Thanks to Angels in Adoption®, I drank from a fire hose for three days. This post, the first in a series, is my attempt to parcel it out in a manageable stream.

I shared a room with friends. Fellow Angels Rebecca Vahle (2011) and Dixie Weber (2017) were my roomies and cohorts in both play and purpose. Rebecca is the founder of the Family to Family Support Network. Dixie, a nurse and healthcare executive, is the newly appointed National Director of Healthcare Programs. Meaning that she helps the Family to Family Support Network provide neutral compassionate care for moms and babies in unique situations such as adoption.

I also got to spend much of Day 1 with Angela Tucker, in Washington, DC to accept the Angels in Adoption® award for Amara, a Seattle organization with programs designed specifically for adoptees past and present. As Director of Post-Adoption Services, Angela herself has forged many of these efforts. You may already know Angela for her starring role in the film Closure, which I cite in my workshops and webinars exemplifying how adoptive parents can be included or excluded on their son’s/daughter’s journey, depending largely on their own openness. 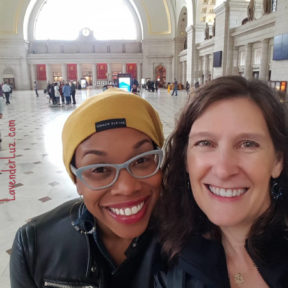 Note: Closure is currently available free to Amazon Prime members. Time to get in on that!

We started the day at a hotel reception, meeting Angels from other states.  At the Advocacy Fair, I learned about many grassroots efforts that center on the well being of children. 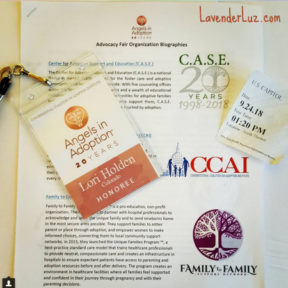 I sat at the Family to Family Support Network table to share our vision for getting upstream on child welfare issues. How? We aim to send babies home from the hospital in secure arms. Family to Family has no stake in the outcome — only in the process. So there is no push toward either parenting or toward placing . Our pro-education approach helps the mom make an informed decision and then get the resources she needs, and it protects her interests along the way.

But the more significant reason is that my companion on the tour was Angela. I thoroughly enjoyed seeing history and current events through both her eyes and my own as we walked the streets and the halls. 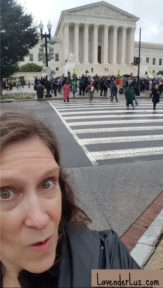 Angela later recounted that while among the statues in the Capitol Rotunda, she and two more women of color were taking in the statue of Rosa Parks. Then a white man stepped in front of them to take a picture, oblivious to the irony of his actions. 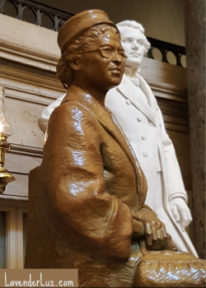 Contrary to what my photography skills show, the statue isn’t made of chocolate. Perhaps this will give you a better idea what the bronze sculpture actually looks like.

Rebecca, Angela and I had a delightful dinner together. If I’d been wearing a step-counter, I bet it would show 20,000 steps for the day. I went to bed both exhilarated and exhausted.

Tomorrow would be an even more jam-packed day.

Day 2 includes getting pinned by an adoptive senator and having a meeting with White House staff. Plus hanging out with my fairy blogmother and more. Stay tuned.

Day 3: A Senator, a Congressman, a Foreign Affairs Subcommittee, and a gala.

8 thoughts on “The Capitol: Day 1 of Angels in Adoption®”