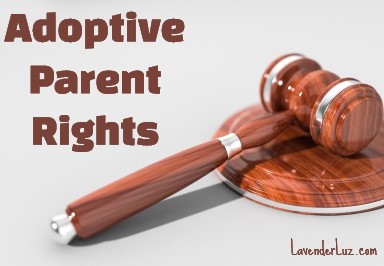 I listened to testimony on a bill making its way through the Texas legislature that would impact people like my son and my daughter. HB 2725 would restore access to an original birth certificate to adults adopted in Texas.

That got me thinking about the rights of the adoptive parent. And for this gentleman, a Texas Representative asking thoughtful questions during this hearing, I weigh in.

In the Eyes of the Law

I’m currently at this legal juncture of handing off rights. My oldest “child” just crossed the legal line into adulthood, and my second is not far behind. Never in this 18+ year journey have I felt less-than any other parent regarding my rights to raise my children as I see fit. Never have I felt threatened by the existence of my children’s other parents. Never have I worried I did not have enough control in the eyes of the law (In the eyes of my children? That’s another matter!)

Once our adoptions were finalized, my husband and I became “forever parents” in the eyes of the law. We have all the rights (and responsibilities) any other parent has. We get to make all decisions and we get to live with the consequences of those decisions. Hopefully, most of our decisions and all that flow from them will be beneficial for us and our kids, as we raise them from babyhood to adulthood.

Adoptive Parent Rights Are Not at Risk

None of my rights as an adoptive parent would change if my grown children decide to procure their original birth records from the State of Colorado (which opened records to all people in 2016). Even with my eldest crossing that legal line, I STILL do not feel less-than, threatened, or worried. I feel confident in our connection, no matter what comes.

There is nothing in Texas’ HB 2725, nor was there in Colorado’s bill 4 years ago, that abrogates my rights as an adoptive parent. On the contrary, we have found that having more information rather than less strengthens our bonds of connection rather than weakening them.

Aside: While it’s not exactly a right for me to have my children’s biology-related medical information, I have found it helpful in executing my responsibility around making health decisions for them (especially in a dynamic way, as medical conditions tend to emerge over the years for birth parents and birth grandparents).

What Opening Birth Records Doesn’t Do

I’m guessing that last one is at the crux of many adoptive parent fears about possibly losing an adoptee to his/her birth family once all the hard work of raising a child to adulthood is done.

But I’m pretty sure this doesn’t happen in healthy, connected relationships. If the law is the main thing binding an adoptee to their adoptive parents, how strong is that connection really?

That’s the real tragedy for adoptive parents: fearing the unknown, the boogeyman (or, in this case, the specter of the boogey-birth mother) looming to swoop in and take away our rightful place in our kid’s life.

When I lead workshops for adoptive parents, I teach that as this power shift begins to occur in the tween/teen years, you want your son/daughter to WANT to include you on their journey, wherever it may lead. Kids are going to go through stuff. They are going to face decisions on monumental issues — drugs, alcohol, sex, and yes, even birth parents. Will they invite us to be alongside and guide them as they decide who and what to let into their lives? Or will they shut us out because it feels as though we oppose them, as though we assert power over them (even after they are legal adults)?

Other Points for Representatives Open to Learning

Equality: HB 2725 puts sons and daughters like mine on equal footing with other non-adopted adults. Restoring access to original birth records is the right thing to do, and any fragility on the part of adoptive parents should not trump the adoptee’s right to be treated equally under the law.

Practicality: Keeping records closed just makes people with natural curiosity go around the law (genealogy is the 2nd most popular hobby after gardening) . I’m sure you’ve heard stories of people taking alternate routes to uncover the early chapters of their lives, including DNA testing and Internet searches. Using these methods when the law stands in the way can cause unexpected turmoil and chaos for people in the birth family, the antithesis of this misguided old law’s intent. With current and emerging technology it’s an illusion to think we can keep information on birth records forever secret. It’s time for the law to get ahead of this.

How wonderful it is when our adult children have all their pieces and CHOOSE to have us along in their journey anyway. THAT is the deep connection adoptive parents are truly after. No boogey birth-parent can swoop in and take that away.

(I’m not saying anyone has to choose between birth family and adoptive family. In many cases, it works best for the adopted person to be able to claim and be claimed by both families. Adoptee math should be more about addition and multiplication than subtraction and division).

Adoptees fear the not-knowing, while adoptive parents fear the knowing.

— Angela Tucker of the documentary Closure

It’s time for adoptive parents to become secure enough in themselves that they don’t need to rely on the law to deprive their sons and daughters of a document others can get.

It’s time for peace of mind that comes from steadfast bonds and enduring connections.

While this bill did not survive the 2019 legislative session in Texas, advocates are preparing to bring it again in 2021 and right this injustice toward adopted people. Please see STAR, Support Texas Adoptee Rights for ways you can help and for updates.