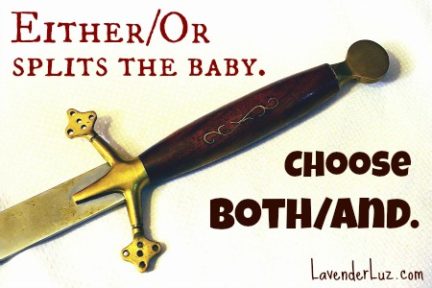 Remember that Sesame Street segment, “One of these Things is Not Like the Other”? Can you pick which one of the four questions is out of place? And more importantly, why it is the misfit of the bunch?

As you can surmise from the title of this post, the fourth option gets the ding-ding-ding. The first three have numerous options not mentioned — there’s also mint chocolate chip and peppermint ice creams, the Cubs and the Jazz, Rihanna and One Direction, plus countless other flavors, teams, singers. It’s only the last one that is a dual option — just two choices —  winner and a loser.

And it’s only the last one that can split a child in two in a way that choosing strawberry over chocolate simply can’t.

The Question is Solomon’s Sword

If you’ve done much adoption reading, you’ve probably sought out posts by adult adoptees. Some adoptees claim they identify exclusively with their birth parents, saying that they never felt like they fit in with their adoptive family. Others explain that their “real” parents were the ones who raised them, changed the diapers, kissed the boo-boos, showed up at the games/performances/events.

Neither answer is right or wrong. What’s wrong is asking the question in the first place. Often, it’s not the parents asking; rather it’s society-at-large wanting a definitive answer to the age-old question of Nature vs Nurture.

Posing the question or asking for a ranking comes from an Either/Or paradigm that splits the baby/child/tween/teen/adult in two. It’s dualistic, starkly black and white, pitting a winner against a loser. Either we are the real parents or they are. Either we can legitimately claim the child or they can. While the baby in the King Solomon story was threatened with being sliced by a literal sword, adoptees are faced with a figurative sword splitting their hearts, their loyalties, their psyches, their identities. This happens anytime the adults around them operate from the Either/Or paradigm.

So What is an Alternative?

Parents in adoption who want to avoid splitting the baby must make a subtle (and not difficult) shift into Both/And thinking.

Adoption creates a split between a child’s biology and biography. Openness is an effective way to heal that split. That’s the premise of the book I’ve written with my daughter’s first mom,  The Open-Hearted Way to Open Adoption: Helping Your Child Grow Up Whole. Openness, referring to not only contact but also to the mindset in which we parent, shifts us into a Both/And paradigm, in which we move from duality toward unity. We multiply instead of divide. We offer to our children wholeness rather than fracture. We encourage them to claim all pieces of themselves, those from biology and those from biography. We enable our children to be claimed by both of their clans.

And we resolve in ourselves any need to be The One. That often-unconscious drive that influences our adoption relationships is more about us and not at all about our child.

My friend Torrejon, an adult adoptee whom I met on an adoption forum that’s committed to Adoptee Rights, turns the “which mom is your REAL mom” question on end. I had asked her about adoptee math, about how to ensure that adding the biology half and the biography half would end up equalling a whole person:

Not half and half…both things. The two parts are not mutually exclusive nor inclusive. Not 1+1=0…but rather 1+1=1. However, adoptees could end up with a 0 if they are divided into exclusive halves:  ½ + ½ = 0

I’ve got two kids. I’m not half a mother to one, and half a mother to the other; I’m a full mother to both of them. That doesn’t mean I’m two halves…or two people. I’m simply a mom with two kids. So, by extension, I prefer to think of myself as existing fully in my two families — my birth family AND my adoptive family. BOTH.

We would have no problem allowing Casey to have a scoop of strawberry today and a scoop of chocolate tomorrow. It would be no trouble if Jamie cheered for the hometown baseball team in June and the hometown basketball team in November. We wouldn’t feel challenged if Riley had both Bruno Mars and One Direction in the same playlist.

Likewise, let’s allow — encourage — our children to expand their hearts so big that they can encompass all the people with whom they identify, whom they have an innate need to claim and be claimed by. Doing so need not take away from  us — it merely adds to our children.

What have you done (or might you do) to shift from Either/Or thinking to Both/And thinking? What ideas do you have to avoid “splitting the baby”?

Last week Executive Director Dawn Davenport and I talked about openness in adoption via podcast. To summarize our BlogTalk Radio interview, Dawn wrote her post, My #1 Secret Tip for a Successful Open Adoption, adding to the vast resources of CreatingAFamily.org.