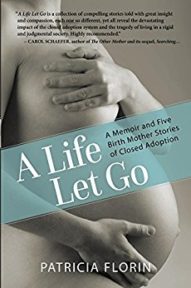 I’ll cut to the chase: I loved this book.

Months ago author Patricia Florin sent me A Life Let Go to review. I had a big stack of books in my queue and not enough reading time to get to hers in a gracious manner, but I finally got time to read during our recent trip to Ireland.

Could Not Put it Down

While traveling I read A Life Let Go on flights and on car rides. I read while standing in lines and at bedtime. Not because it’s an easy read; it’s a tough read for the pain in it. But resilience shines through as well. It’s affirming to watch broken people find ways to become whole again.

If you’ve ever wondered how someone can “give up” their baby for adoption, order this book. The stories in it explain what having an unplanned pregnancy and closed adoption were like during the Baby Scoop Era when, due to shame (for the baby having the bad fortune to be conceived accidentally, for a woman in an oops pregnancy,  for couples unlucky  to not be able to make babies), things had to be hidden.

A Life Let Go has six sections. The first is Patricia’s own story of an unplanned pregnancy in the 1970s. During the last few months of her pregnancy she is forced to hide in the upper floor of her parents’ home, lest her situation bring shame to the family.

The other five stories Patricia collected from women she met in her efforts as a community builder for this hidden population. Each story speaks to the devastation that resulted from the closed adoption practices of the shame-based era.

Evelyn, mentioned above, had placed two children a few years apart and in different families. She eventually found both when they were adults. Reunion went smoothly with her son, Philip, but not so much with her daughter, Julia. Closedness had made Julia’s adoptive mother brittle, unable to shift from an Either/Or mindset to a Both/And heartset.  Excerpt:

Julia had told her mother about my finding her, and her mother was unsure about it. I wrote Julia’s mother a letter to show I was supportive of her relationship with Julia, not a threat.  I got a letter back saying “Julia is our child and you have broken confidentiality by contacting us. Please don’t ever contact me again.”

I haven’t communicated with her since.

Because her adoptive mother doesn’t approve of my finding Julia, Julia feels disloyal when she contacts me, so I leave it open with her. I let Julia initiate and direct all our communication. When I do get to talk with her, it’s like we were never apart.

Kudos to Patricia Florin for putting together a book that helps readers understand the predicament, the non-choice, that so many women in the 1950s-1980s faced when they found themselves unexpectedly pregnant. Thanks to Patricia and her contributors for highlighting the ongoing burden that the closed, shame-based system placed on everyone involved in adoption — including adoptive parents like me.