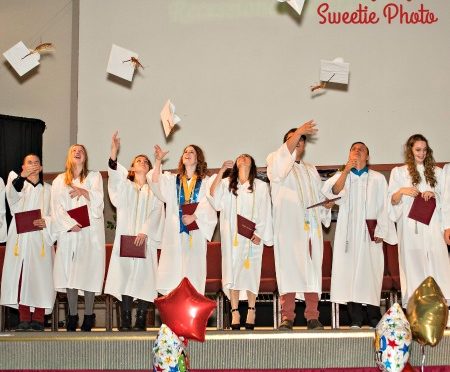 Last week I got be the commencement speaker for the graduating class of 2017 at the school where I teach.

Even though the audience was smaller than the adoption agency groups I usually present to, I got about ten thousand times more nervous this time. The people in the audience here know me. Afterwards, some in the audience will still see me, even after the mic drop.

Another reason for my high anxiety was that I’d taken on a new class this school year: Public Speaking. I’d just taught my students everything I know about the subject, and they would be primed to figure out where I was succeeding (eye contact! confidence! preparation!) and where I was falling short (ummmmms, y’knows, boring).

Facts Are Now in Your Hand Even if Not Your Head

Public Speaking & Debate was requested by my social studies students a year ago as an extension of discussions we hold at the end of each year’s History classes in a current events unit. The teens enjoy delving, dialoging, debating. They wanted an entire course on it.

So this year I created a class for them. Only it turned into so much more than just about giving speeches and debating.

Teaching is different nowadays. Each of us holds All The Facts in one hand (assuming that hand holds an Internet-connected smart phone). No longer is learning primarily about encoding and retrieving facts. In addition to knowing facts, I want my students to be facile and critical thinkers.

So given some latitude in formulating this class, I realized that at the base of being a good speaker is being a good thinker. I wanted my students to be able to think critically and to be savvy consumers of every person or organization that wants their attention, their loyalty, their money, their vote. I want them to be able to make conscious decisions what they give attention to, where they place their trust, whom/what they vote for at the ballot box or cart checkout, in whom and in what they believe.

How Do We Know What We Know?

The main question we kept returning to this year was, How do we know what we know? How do we know anything? We rely on scholars and academics to do research and write textbooks that tell us what the facts were. Are.

We’re told that history is written by the victors, so how do we know that what’s in the history book is  true? Might the losers have told the tale a different way, maybe even with alternative facts?

We can be reasonably sure textbook information is true, but not absolutely sure. Textbooks — at least history ones, change over time because how we view history changes with how we view ourselves — which changes. Compare textbook units on the Civil Rights Movement, the Middle Ages, or Ancient Rome from the 1980s and the 2010s, and you’ll find differences in the way the facts are known and presented.

It was fascinating to teach this class during an election season. We had a lot of debate on the same issues that you, dear readers, were debating with your people. Sometimes it was impossible to come to any kind of agreement because we couldn’t all agree on what were actual facts and what was actual news.

A student would say they saw something on Facebook, say about #blacklivesmatter. Another would counter with, “Oh yeah? Well I heard this that supports #bluelivesmatter.” Both sides would take the stance “I’m right. You’re wrong.”

This happened over and over again on a wide range of issues.

So we watched this TED Talk by Julia Galef.

After watching, we talked about what each of us yearns for more — to defend our beliefs (warrior mentality)? Or to see the world as clearly as we can (scout mentality)?

One feeds certainty and the other requires ongoing curiosity.

We read this article in Medium called “The Other Side is Not Dumb” by Sean Blanda. We would on occasion conduct his Controversial Opinion activity (which my students ended up calling The Curiosity Experiment). In it, one person states their belief about a controversial issue — legalizing marijuana, the death penalty, abortion, a presidential candidate. Other students can respond only by asking questions about what makes the hotseat person believe what they believe.

I had to clarify that questions can be only of the curious type (what makes you believe that climate change is a hoax?), not the trying-to-convince-you-you’re-wrong type (don’t you know that 8 gazillion scientists disagree with you?).

Over the course of the year, it was a beautiful thing to watch students open up to each others’ viewpoints. They became more curious — more scout-like and less warrior-like — and along with that, less judgmental of each other.

Even in my classroom, I’m promoting openness.

Of course, we also covered great speeches. We watched Martin Luther King’s “I Have a Dream” speech, TED Talks on stress and body language, how appearances aren’t everything, and insights about procrastination (one of my faves by one of my crushes).

We laughed a lot — and learned a little — by watching a TED Talk parody.

Late in the year we critiqued graduation speeches by Elon Musk and  Dr Atul Gawande, for the science-minded. For the liberal arts-minded, we critiqued these gems by Lin-Manuel Miranda and  John Greene (another of my crushes because of his oh-so-hot Crash Course History series).

The general consensus was that the storytellers from the liberal arts arena came by their speaking skills more naturally than the the keynoters from the science and engineering fields did.

Can you understand why I was nervous to follow all that?

My students delivered many types of graded speeches of their own over the course of the year.  They all grew so much in their thinking and speaking abilities, and I am so proud of them. I’m fortunate to have been alongside the 2017 graduates on a small portion of their journey.

As for the undergrads, I’m excited to see them in 12 weeks, but I’m glad for a little break!

What’s the most nerve-wracking thing you’ve done this year?