Liz at PoemFish asks, “Does it do any good to fight? Does HOW we fight matter? I’m wondering this because two items online this morning have me pulling on my boxing gloves.”

I was involved in one of those online kerfuffles. I am host of a Google Plus group called Open Adoption Advocates.  Our About statement reads We believe that openness in adoption can bring benefits to all involved, and we’ll do what we can to evolve the closed-adoption mindset. This is a place to learn about the effects of both openness and closed-ness in adoption. This is not a place to seek an adoption match.

I am the gatekeeper for membership, and I have never not approved anyone who has requested to join. I did, however, add the last sentence to the About blurb a few months ago when a couple’s first few posts seemed like they were soliciting a match — and that took care of that. Besides adoptees, first parents and adoptive parents, in our group we also have waiting couples, a magazine, a homestudy provider and a few agencies, as well as people for whom I’m not sure what their interest is.

I don’t do a lot of vetting. If anyone wants to listen in on our conversations about ethics in adoption, about building and sustaining child-centered adoptions, about listening to varied viewpoints within the adoption constellation, about healing the split caused by adoption, I’m all for that.

I’m not for trolling. But I’m careful to label the behavior and not the entity.

Last week an adoption facilitator (not an agency) asked to join. Upon being accepted, it made its first post that included a link to its website. Members checked it out. Laura found that this facilitator provides gold star travel and housing services to “birth mothers,” relocating them to chi-chi areas around Los Angeles for the duration of their pregnancies. I suggested to the facilitator that perhaps it should take a look at our About statement, and that “expectant mom” was the more accurate term prior to placement. I also pointed out that much of their counseling about open adoption (which was lame and one-sided) sounds more like placating fearful pre-adopting parents than helping clients build a child-centered extended family. Other members followed with their own comments, some with jaws on the floor at the facilitator’s audacity and erroneousness. Anger began seeping into the discussion — a discussion the facilitator was not acknowledging.

I called for a moment for everyone to step back and breathe, tagging the facilitator so it would come back and read.

Whether [Facilitator] came here to sell us or learn from us, we can be more welcoming. [Facilitator] may very well discover that this is not a group that fits it well and may decide to leave and spend its energy elsewhere (because no one here is buying).

On the other hand,it is possible that [Facilitator] has not considered some of the points we are raising and is willing to listen and learn, but only if we ourselves model openness.

[Facilitator], you have a place here if you are open to learning about a different and more functional view of adoption than the one depicted by your website, which has some obvious triggers.

Why did I not just ban this facilitator? 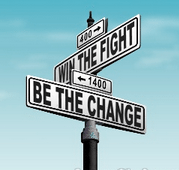 Because I would be a fraud if I extended openness only when it is easy and convenient to do so.

Because it’s one thing to preach to one’s choir. It’s another to encourage someone whose views are antithetical to your own to take a new look at their old viewpoint. Are we able to use the principles of openness to deal with people who disagree with us? I think of Gandhi and Martin Luther King, Jr and the ways they changed the wrongs of the world — by getting the oppressors to see an old thing in a new way.

Because attacking and defending leads to more attacking and defending and it rarely leads to real, self-directed change. If the problem is ignorance, then the solution is to educate. You can’t educate someone who leaves your group, someone you’ve shamed in the process (which, by the way, didn’t happen in our group). They leave and feel more dug into their position. And instead of having a small chance to turn someone around, you make them even more of what they were in the first place.

Because I was thinking about the situation in terms of shame. Once we begin trying to effect change with shame, we have lost. At the same time this situation was erupting, there was another online fuss highlighted by Jezebel in which one blogger (whom I’m not linking to) used shame as a strategy against another blogger to combat, yes, shaming.

Back to the original kerfuffle (such a whimsical term for something so unpleasant).

Without acknowledging any of the fallout from its first post, two days later the facilitator made a new post in our group. This time a statement that extolled how well it supported “birth mothers” and an image with the caption: “One Year Guarantee | Adopting Parents.”

Members were not amused. Nor was I. The facilitator had proven not reachable, not teachable. It wanted only one-way communication in which it tried to sell, but it was clear no one would be buying.

The boundary I’d set earlier had been crossed, and removing the facilitator from the group was now an option. One that I executed without further hesitation.

I am removing you from this group as we are obviously at cross-purposes and you are clearly a talker and not a listener.

I left an open door:

Should you have a change of heart about how you treat expectant mothers (what you call “birth mothers”) and so many other things, please contact me directly.

Liz closes her post with these questions, which I now ask you: “[Is there a] way that I can hold onto my passion for justice while also being effective, engaging without fighting…How do you advocate online? What works?”