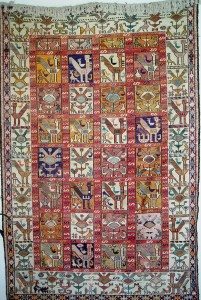 While browsing for carpets in Aleppo’s souk a month after our arrival in Syria, Roger and I became ensnared in the lair of  an enthusiastic carpet salesman. We had made known that we had no intention of buying, yet our protests only made the smiles, words and tea flow more readily.

“THIS carpet,” said our proud host as he threw yet another rug on top of the already foot-high pile of rejected rugs, “represents the happiness motif.”

Admittedly, this carpet was a cut above the others, and I could feel my interest rise for the first time. The design was intricate, the fabric was a shiny and luxurious blend of silk and wool, and the weave was finer than anything we’d been shown. I was ready to nibble as he delivered his spiel de resistánce.

“Madame has a good eye. This carpet was woven from the fingers of an eight-year-old girl. It took her ten months to make this to support her family, and you can have it in your living room, no?”

I didn’t closely examine all these “shoulds” at the time, and for a number of reasons we didn’t buy a carpet that day. Only later, after living in Syria for awhile, did I revisit my feelings of revulsion and judgment.

Sometime in the last century, societies in fully developed countries reached an unprecedented general level of affluence. Much of what we now call “rights” we used to call “privileges.” We demand the right to education and lose sight of the privilege it once was. We expect childhood to be a stage of life exempt from earning expectations, and we demand that children should be free from worry and from the dependence of their caretakers, survival issues never entering their protected world. This is our ideal, and even though it’s not always the reality, it is the expectation.

But people in undeveloped or developing countries (or in the margins in our own) may not yet be able to hold the same expectations. A mouth to feed must be matched by hands that contribute. Everyone who is able must pitch in at least in a general way, such as bringing home the bacon (or lamb) or frying it up in a pan. Specialization of labor occurs when a member of the group can, through talent or physical attribute, enter a more lucrative outside market, like carpet weaving.

Was I too tough in my judgment initially? Did I go all “ugly American,” showing the superiority for how WE do things and disdain for how THEY do things?

Was I too lenient upon later reflection? The practicality defense opens up all sorts of wormy cans, such as prostitution, child and otherwise.

How do you look at another culture without allowing your own culture’s lens to distort your view? Is there a true north when it comes to a cultural moral compass?

(This post is in response my dry spell. Thanks so much, y’all, for coming up with some good suggestions.)

9 thoughts on “Context and culture: When 8 year olds weave carpets”