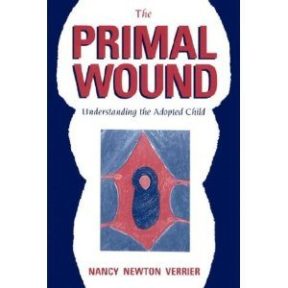 Our current book tour selection is The Primal Wound: Understanding the Adopted Child by Nancy Verrier. I and my fellow Book Tourists — adoptees, first parents, adoptive/adopting parents — spent November (Adoption Awareness Month) reading this controversial book that was originally published in 1993 — the early days of the open adoption era.

My take on it? Lots of yeses and lots of nos.

The premise is that a primal wound exists for every baby/child/teen separated from his/her biological mother. This includes not only adoptees, but also babies placed in incubators, children born via surrogacy and children placed in day care. The thesis continues that such a primal wound leads to issues that “center around separation and loss, trust, rejection, guilt and shame, identity, intimacy, loyalty, and mastery or power and control…”

There is a lot of insight in this book, which was written by an adoptive mom and therapist whose daughter was in deep pain. I think it’s well worth a read, especially at this stage of my children’s lives (they are 8 and 6).

When my children were babies, I would not have been as open and receptive to Verrier’s thesis as I am now. During the baby years, I felt there was no question that my children had bonded with me. With my first, I was in a state of euphoria — after years of drought, I was finally a mom! We had reached the happily-ever-after and because of what we’d been through to get there, the rest was to be a piece of cake. With my second, the attachment took a bit longer, seemingly on my end. I was certain, after we morphed into a tightly knit family, that happily-ever-after had resumed.

But babies don’t stay babies. They grow and individualize and wonder and work things out. Issues arise. Some are overt and I can help with them. Yet other deeper issues may exist beyond my ability to reach. Reading this book extends my abilities by giving me insight into what might be going on as my children grow — what to watch for what emotions lie beneath the behaviors, and what I might be called on to do or to allow to play out.

Children with a primal wound, according to Verrier, tend to be either highly controlling or highly compliant, as a result of a pre-verbal assault on the rightness of their world, of the utter lack of control during this defining episode of their lives. “Having been manipulated at the beginning of their lives makes some adoptees manipulating and controlling.”

Children who become compliant, according to Verrier, may become highly responsible — not because they are healthy and well-integrated, but as a response to that initial rejection. “As Rick said, ‘I knew I had to be a better person than the one who was given away.'”

Children with a primal wound, according to Verrier, tend to have difficulty in relationships, with intimacy, due to this early break. They often pre-emptively push away people (and jobs) to avoid being hurt again. “Being wanted by my adoptive parents doesn’t compare to being unwanted by my birthmother. — an adoptee.”

Ouch. What a powerful statement. We parents are wise to listen.

There are more indications of the primal wound, all worth knowing about, if only so that I can recognize what may (or may not) be happening for my kids as they become tweens and teens and adults. In my opinion, knowing is almost always better than not knowing — hence my advocacy of open adoption and open records.

Many of the noted issues — “separation and loss, trust, rejection, guilt and shame, identity, intimacy, loyalty, and mastery or power and control” — perfectly describe ME. My own parents say that *I* am controlling. I became overly responsible and strived to be perfect. I have had trouble with abandonment. I have felt unworthy. I have felt I don’t fit in with my own family.

I was separated from my mom at age 5 by an oxygen tent, so maybe I *do* suffer the primal wound.

But is it possible that perhaps these issues are maybe somewhat universal?

Me: Anonymous, I gather, suffers from a Primal Wound.

“I was adopted as an infant, I have a great adoptive family that I love very much. I was not abused. I got everything I ever wanted, went to college and have had a good life. I would give it all up to have been raised by my 17 year old emotionally immature birth mother. I would give it all up to experience what it would be like to grow up feeling normal, like I belonged and happy.”

In essence, Anon asserts that the road not taken (the abstract) is superior to the good life s/he has had (the concrete).

The appeal of that road is that it is a fairy-tale road. There are never any potholes, and the sun always shines, but not too hot. It’s a smooth, gently sloping road with bounteous apple trees adorning the sides. In short, it’s the angel you don’t know compared to the devil you do.

No one can ever prove or disprove Anon’s notion that a life with a not-ready-to-parent biological mom would have been better than a life with those who parented her. Because we each get just one road.

This is the crux.

The comment started a new train of thought about roads not taken, which, as Melissa pointed out to me, is not just part of the adoption experience. It is part of the human experience.

On to my three chosen questions, asked by others touring with me.

Verrier presumes that most adoptive parents are ill equipped to handle the emotional complexities experienced by adoptees. Did/do you feel well prepared to address the sense of loss that your child might experience? How did you prepare yourself? How do you help/plan to help your child resolve his/her feelings about his/her adoption?

To prepare myself, I have read lots and lots of first-person accounts of adoptees, running the gamut from happy to angry, which are very simplistic labels for very complex people.

I listen to what they say. I try to grasp what I can do to help (for example, keep communication open), what I should refrain from doing (for example, put the children in a position to divide their loyalties), and to also know when I cannot help — when I must simply abide with my children while they work things out.

And I ask for the wisdom to know the difference.

How do you think open adoption changes the feel of this book? If you don’t feel it changes it in any way, why? If you feel that it changes everything, in what ways? If you fall somewhere in the middle, how do you explain what does get changed and why other things are left unchanged?

I think open adoption does change the situation. I don’t think it ameliorates it, but it does go a ways in relieving the tension of all that not-knowing.

I have two main concerns about our open situations:

As far as openness being an improvement over closed adoption, the proof is in the pudding. My children will be the final arbiters on this question as it pertains to them, in about a decade or two.

What signs did you see in your child that support the concept of a primal wound derived from separation of mother and child in the process of adoption?

When we were going through reunion with my daughter’s first father, I did also notice a push/pull as she was simultaneously drawn to Joe and also needed to know she was firmly rooted with us:

While I don’t take it as gospel, I do recommend The Primal Wound for adoptive parents and pre-adoptive parents. Further, I recommend that the book be read periodically as the child grows and experiences different stages of cognitive development. It is also helpful to listen to the voices of adult adoptees — for me, anyway.